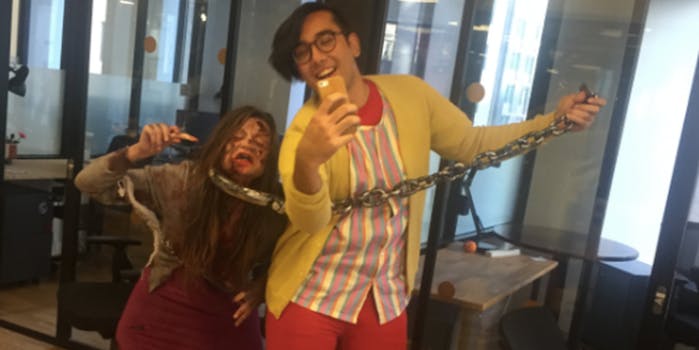 This is what happens when you order a zombie from Lyft

Only the intern survived.

NEW YORK CITY — Five employees of the news organization the Daily Dot were mauled in a zombie attack at the company’s New York City office this afternoon.

The attack occurred at 3:30pm ET, when a female zombie staggered into the newsroom to feast upon juicy brains.

The zombie arrived with a handler—ordered via ride-sharing app Lyft—and attached to a chain; panic ensued when the chain snapped and the handler quickly lost control of his creature.

Gabe Bergado, 23, a writer for the LOL section, was the first victim.

got attacked by a zombie at work today, that was cool! Thanks @JessicaWakeman! #LyftZombieMode pic.twitter.com/7YCGY15y3b

There appear to be no hard feelings between Bergado and his undead assailant, however.

Deputy Opinion Editor Derrick Clifton, 26, also had his brains eaten after attempting to take a selfie with the the zombie. 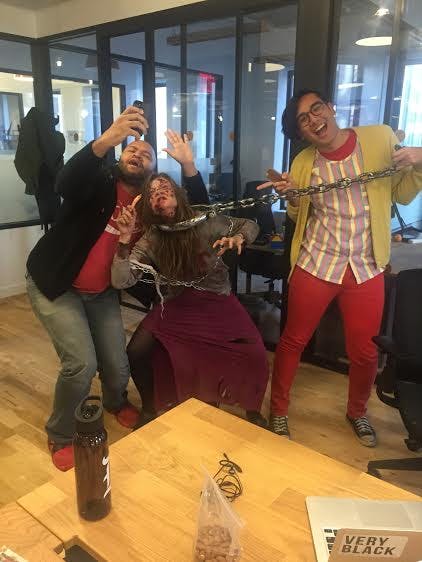 Experts believe the Daily Dot zombie attack was so successful because the zombie disoriented her victims first by turning off overhead lights in the office:

The sole survivor of the Walking Dead-style attack upon on the Daily Dot office was Politics Intern Deron Dalton, 26, who fled the premises upon the arrival of the zombie.