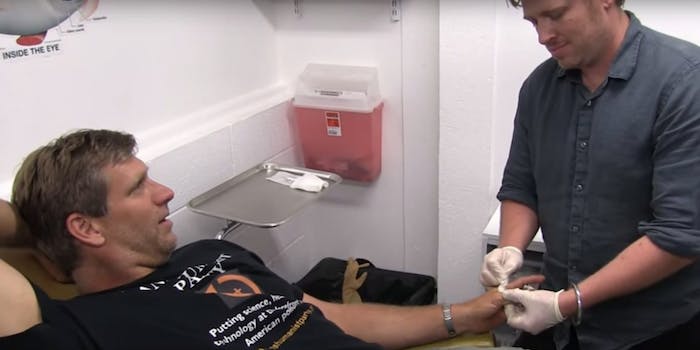 Maybe the difference between RFID and LSD is just another door of perception.

Even though I was born after the 1960s, I’ve always been fascinated with that era. Some people credit Ken Kesey’s cross country bus trip aboard colorfully painted “Further” as helping to create a generation of hippies. Of course, my Immortality Bus (shaped to look like a coffin) wants to stir up the national consciousness as well, aiming to usher in its own cultural shift. Whereas the ‘60s were about peace, love, drugs, and sex, I believe the next decade will be about virtual reality, implants, transhumanism, and overcoming death with science. For futurists like myself, that’s quite an intoxicating mix.

The fact is that a lot of radical tech, science, and medicine are already here in America. Consider that today the paralyzed can walk via exoskeleton suits, the blind can see via bionic eyes, and the limbless can grab a bottle of water and drink with artificial limbs that connect to their nervous system. Additionally, lifespans are increasing for people all around the planet. Science is rapidly making the world a better place, and it’s starting to eliminate suffering and hardship for billions of people. 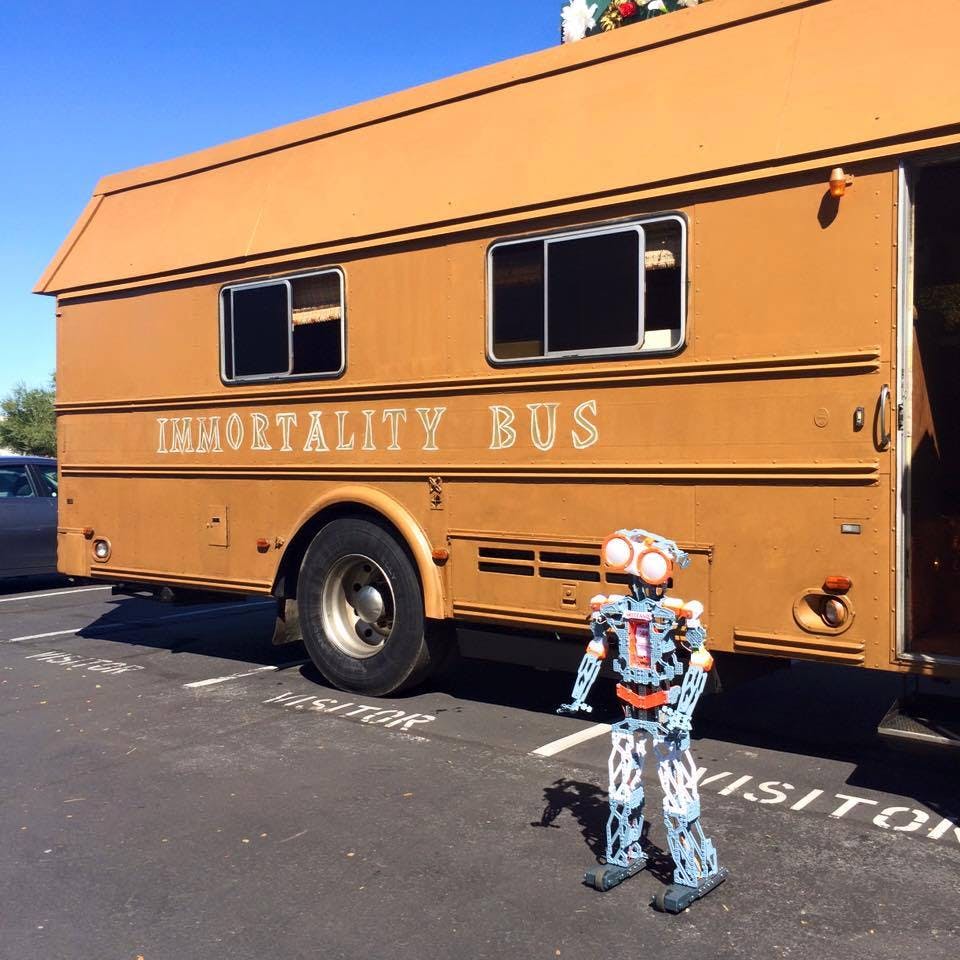 My bus tour aims to celebrate this burgeoning science and tech landscape, but more importantly, it also wants provoke serious questions, perhaps most importantly: With so much brilliant opportunity in science and tech at our disposal in the 21st century, why does the government still spend almost 10 times the amount of money on war and defense instead of on science and medicine?

If fighting is your thing, we can still fight trillion-dollar wars, but let’s fight them against cancer, diabetes, heart disease, aging, and even death.

You might think the health of citizens would be priority no. 1 for our government, but it’s not. America still seems bent on a Manifest Destiny path, and I for one—especially considering increasing globalization—don’t care to pretend it’s an absolute that we must be the most powerful nation on Earth. I rather be good friends and partners with other nations than their bossy, overanxious police guard.

As one of the youngest 2016 U.S. presidential candidates, I know America can do better. I know we can transform this country from a war-prone military industrial complex into a scientific and education industrial complex. It doesn’t mean we have give up a strong economy, either. Rather, it means we turn bomb factories into medical research labs; we can turn prisons into universities that offer free education; we divert spending on wars into spending on science. And if fighting is your thing, we can still fight trillion-dollar wars, but let’s fight them against cancer, diabetes, heart disease, aging, and even death.

Given the name of my presidential coach—the Immortality Bus—it’s no surprise the primary goal of most transhumanists is to eliminate biological death altogether. Some leading gerontologists believe we are just decades away from that time. Chief scientist at SENS Research Foundation and Transhumanist Party Anti-aging advisor Aubrey de Grey told Reuters, “I’d say we have a 50/50 chance of bringing aging under what I’d call a decisive level of medical control within the next 25 years or so.”

On the first week aboard our oil-leaking 1978 coffin bus—which criss-crossed California and Nevada—we stopped at a biohacker event in Tehachapi, California called GrindFest, hosted by Jeffery Tibbetts. Vox’s Dylan Matthews and I both got implants—specifically they were glass-encased Radio Frequency Identification (RFID) NFC chips—which involved nothing more than a 60-second injection procedure. The implant was placed into our hands through a thick and slightly intimidating needle.

I was a little worried about getting it at first, but Transhumanist Party biohacker advisor Rich Lee told me if very safe and I would barely feel a thing. He was right. The procedure was quick and mostly pain-free.

Later, I walked around the huge garage at GrindFest, where tables and countertops with biohacker equipment—scales, pliers, soldering tools, implants, microchips, and more—were scattered about. I couldn’t help thinking how cool and bizarre it all was. In one far corner there were bacteria races—where participants took samples from their flesh, placed them in petri dishes, and watched to see which person’s microbes grew most quickly.

In 10 or 15 years, we might be giving ourselves brain implants.

Naturally, my journalist friends and I laughed when thinking about our bus trip and this stop compared to Kesey’s trip of Further in the ‘60s. Instead of taking LSD and wandering around the desert speaking to plants (something I’ve done before), we shot up implants and tried waving our hands across cars that would start up when recognizing the chip—without keys. Someone at the GrindFest could actually do this with his chip. With my implant, I also wondered if I might somehow control the four-foot robot (named Jethro Knights after the protagonist in my novel The Transhumanist Wager) that travels around with us on the bus. 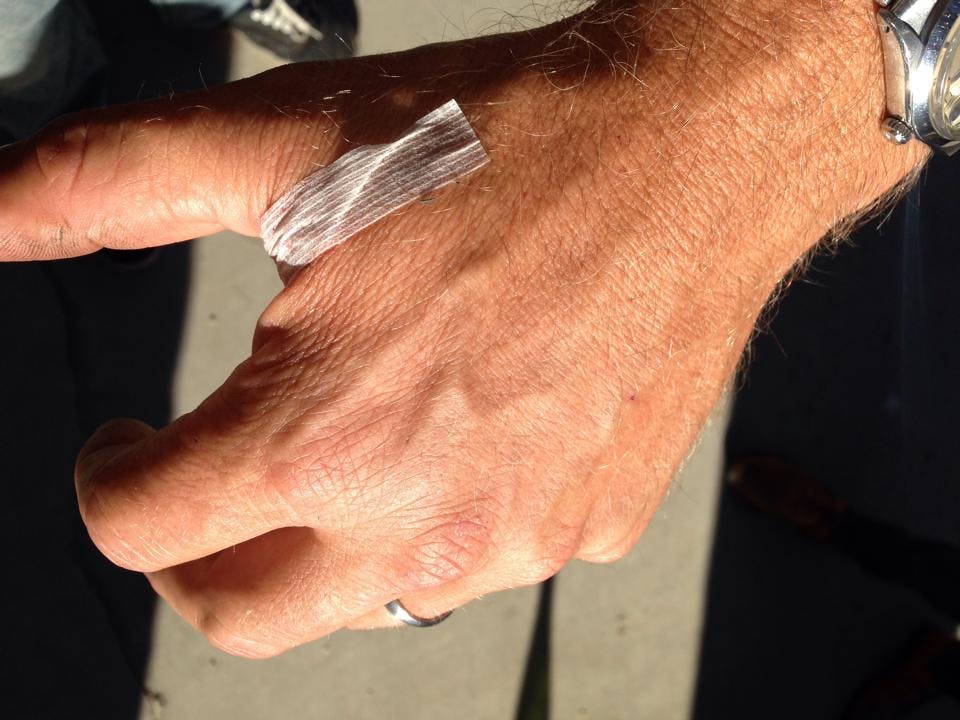 Putting the fun aside, the more philosophical question on many Immortality Bus riders’ minds was: Does half a century really make that much of a difference—from the 1960s to now? I think given how fast tech and science is evolving, it does. In 10 or 15 years, we might be giving ourselves brain implants (there was a skull implant at the GrindFest promising biohackers could listen to music wirelessly) and others were slicing open their fingers to get magnet implants so they could have the “sixth sense” of feeling metal around them.

Rich Lee told me—with a grin—that I should’ve been here the night before. Grinders were running around partying and shocking each other for fun. I smiled, thinking these were exactly the kinds of festivals and people I wanted to be a part of when I left my home in San Francisco on my bus trip.

After GrindFest we cruised to Las Vegas for my speech at CTIA SuperMobility, listening to cassette tapes from my youth on the way. I put on The Doors, and thought maybe the generational gap isn’t as wide as it seems. Maybe each generation (and even the species itself) is always just a bridge of sorts, and the difference between RFID and LSD is just another door of perception.

Zoltan Istvan is a futurist, 2016 U.S. presidential candidate of the Transhumanist Party, and captain of the Immortality Bus.