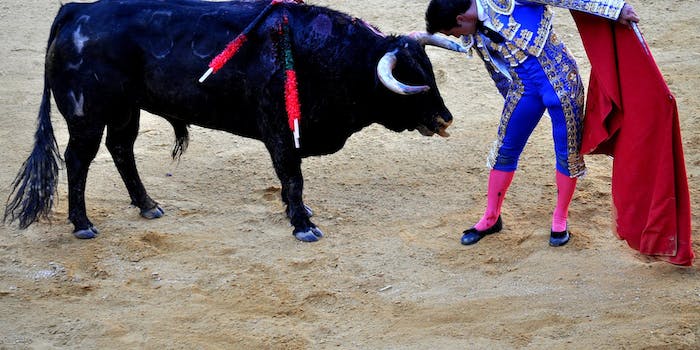 Any video featuring blood or showing a bull being speared or killed violates YouTube's terms of service, said a spokesperson.

Fans of Spain’s “national fiesta” are outraged with YouTube after they pulled a number of channels and videos that featured bloody bullfights.

YouTube confirmed that they removed the videos from their website, citing that those videos violated one of their community guidelines, which says: “Don’t post videos showing bad stuff like animal abuse, drug abuse, under-age drinking and smoking, or bomb making.”

Bullfighting is a long Spanish tradition; more than 2,000 bullfights occur every year in Spain, according to The New York Daily News. However, the sport is often controversial, and PETA states that approximately 250,000 bulls die in bullfights every year. Animal rights activists are calling for a complete ban on bullfighting and applauded YouTube’s efforts.

A YouTube spokesperson told the Spanish newspaper El Mundo that people would still be able to post videos on YouTube “of bulls with the cape or the bullfighter’s stick.”

However, any video featuring blood or showing the bull being speared or killed would now be banned, and YouTube can remove any video that doesn’t comply with their content requirements without notice.

Pablo Lopez Riobo found his channel was suspended by YouTube on Thursday for “repeated or severe violations of our Community Guidelines and/or claims of copyright infringement.”

He told El Mundo that his videos have been viewed more than 17 million times, and more than half of his audience are non-Spanish viewers.

“We must not give from our fans, and with respect for the dissenting opinion of others, to bullfighting culture and its free propagation,” Riobo said according to Google Translate.

Some of the petition’s supporters see the ban on bloody bullfights as a double-standard for YouTube, which allows sexually-suggestive clips to stay on the site. Others are calling it a form of censorship and “a lack of respect for a much loved tradition.”

“Bullfighting is art and culture,” Eduardo Martinez wrote. “It is life and magic rite. a way of life is just and honorable. Where man and the bull are combined into one to create unique and unrepeatable moments.”