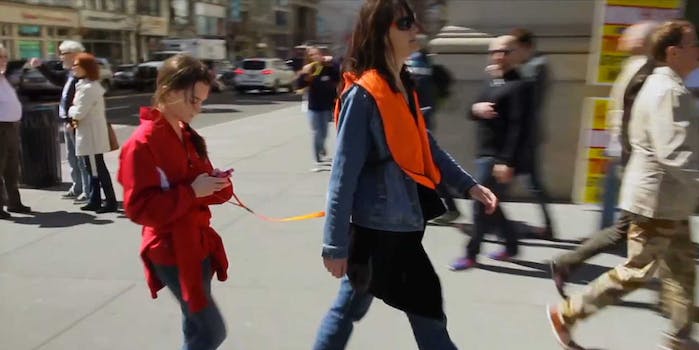 Improv Everywhere found chronic texters a seeing eye person so they could walk and type at the same time.

Texting and walking is a huge epidemic in New York City, so the Improv Everywhere guys found those chronic texters a seeing eye person so they could walk and type at the same time. Needless to say, some onlookers want a seeing eye person of their own.

We probably wouldn’t like Teenage Mutant Ninja Turtles as much if the cartoon was made to be scientifically accurate. They’d give us salmonella, they’d never be able to hear humans scream for help, and they’d get diseases from Master Splinter.

Renowned propmaster Tony Swatton has made copies of iconic weapons from pop culture before, but now he takes on a weapon that seems almost impossible even in that universe: Captain America’s shield.

4) CinemaSins, “Everything Wrong With Django Unchained In 4 Minutes Or Less”

While critically-acclaimed, Django Unchained is the latest film to be skewered for its many inaccuracies, plot holes, and continuity issues, along with a bonus round of things that you just wouldn’t see in 1858.

Using just their voices and a series of stomps and claps, Peter Hollens and Tyler Ward come together to give a fresh new take on a song that’s already had plenty of radio play.