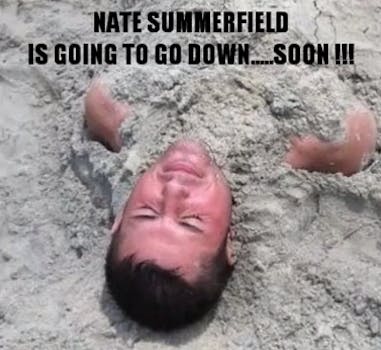 A community in Ashland, Ohio, has turned to YouTube to find an alleged murderer being sought as a fugitive.

Nathan Summerfield, 27, is the prime suspect in the murder of estranged girlfriend Lynn Jackenheimer, a 33-year-old mother of two. She was last seen July 4, vacationing in Nags Head, N.C., with Summerfield and her two children, the elder of whom has autism.

The four had traveled from Ohio to North Carolina for the holiday, but only Summerfield and the two children returned. Jackenheimer’s body was found in the brush along the beach of nearby Hatteras Island a few days later. The coroner who inspected the body declared stab wounds and strangulation to be the cause of death.

According to Ashland County Sheriff’s Department Captain Carl Richert, Summerfield dropped the two kids off at a family member’s house before going into hiding. Richert said that his office has received a phone call from Summerfield’s brother saying that Summerfield privately confessed to the murder before fleeing.

Richert told the Huffington Post that he has six full-time detectives plus himself working on the case. There’s also a team of detectives investigating the case in North Carolina, Richert said.

In Ashland, community members have compiled news reports, community rally pictures, and photographs of Summerfield into a YouTube video titled “Wanted For Murder—Nate Summerfield,” a three-minute video set to the Sick Puppies’s “You’re Going Down.”

The video, “dedicated to those who continue to search for justice in the name of Lynn Jackenheimer,” opens with a plea for people to call 911 or U.S. Marshals if they come across signs of Summerfield. It ends with a photo of Summerfield lying under a pile of sand with the words “Nate Summerfield is going to go down… soon!” written across the top of the screen.

Posted to YouTube Sunday, the video has already received more than 3,500 views, though Summerfield remains on the lam. Richert reported that he and his team have had no luck finding the alleged murderer.

“The longer it goes, the worse things are,” he told the Huffington Post. “I would give anything for her just to show up and say, ‘Sorry, we had a fight,’ for her sake and the kids’ sake.”