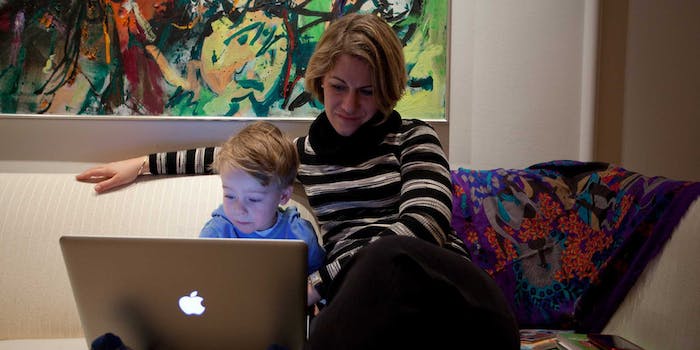 “Do couples really swing still?” “It’s alive and well in our burb.”

“Do couples really swing still?” asks an anonymous user of YouBeMom, the parenting community for mothers founded in 2008. “It’s alive and well in our burb,” reads one of the replies. “Bergen county?” “Yup.”

Mondeep Puri founded YouBeMom, or YBM, after a substantial redesign of the parenting site UrbanBaby.com caused an uproar that was covered in the New York Times and Wired. YBM launched a week later, emulating the simplicity of UB’s earlier layout and design, and was quickly populated by the mass exodus of disgruntled UB users.

But rather than attracting new moms and parents over the years, YBM’s user base has remained essentially static, according to Puri. “The website was at its peak six years ago, and probably a lot of people at that time had little kids—as their kids get older, they move on, they don’t have time or they’re not as interested in coming on a discussion forum as often,” said Puri. The site has a counter that displays the current number of visitors; while reporting this story, I saw it go as high as 350 and as low as 175. “I don’t think we’re getting as many new users.”

Part of that is, maybe, a design issue—the site having retained an aesthetic that already felt clunky in 2008. “People don’t like change,” Puri said.

“When you first come to the website, if you’ve never seen it before, you look at it, it’s not apparent how to use it. You create a new post under subject, but nobody writes a subject, everybody writes their post in the subject.” Puri laughed, “New people probably come to the site and feel intimidated, there are all these discussions going on, do they really want to jump in.”

“I can see how it would be confusing,” she conceded. 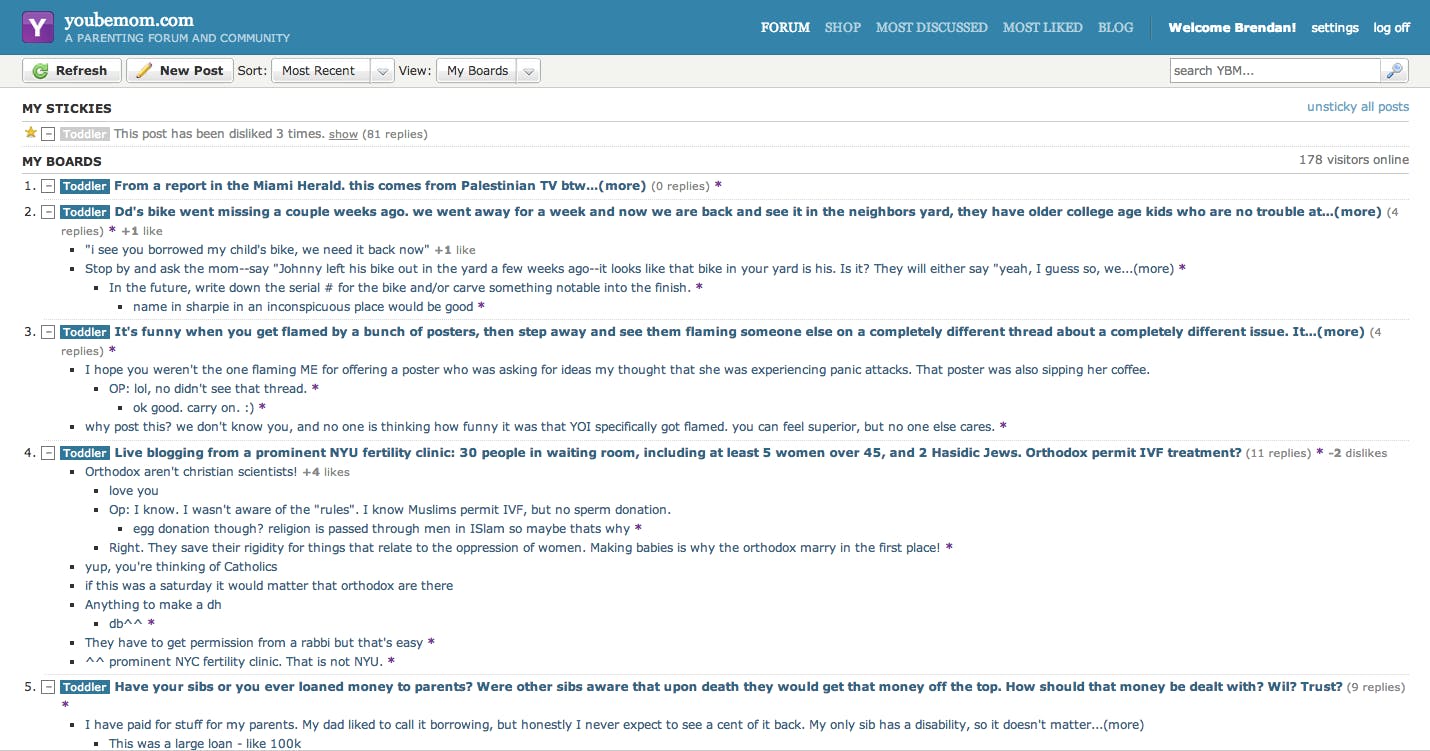 “When the site first launched, it was a younger group of moms—well, not younger, but moms with younger kids. So the topics used to be about sleep training, do you let your child cry it out, what’s the best stroller to use in the city—because this was a New York City–centric community, it’s still NYC-centric but there are people on it from other areas—and, you know, diaper rash.”

“Now the topics are more about ‘red-shirting,’ because everybody’s kids are getting older.”

Red-shirting is the term used to describe holding a child back so that he or she is 6 years old, rather than 5, when starting kindergarten. “There’s a lot of fighting about that,” Puri said. “People say it’s not fair to the other kids that are younger that start at 5 and have these big kids. Other people say I’m the mom, and I know what’s best for my child. So it’s a very contentious topic too.”

Despite the ideological divide, YBM users share a common language, a set of acronyms that Emily Nussbaum described as early as 2006 in her profile of UrbanBaby for New York magazine: “Comments are studded with baffling abbreviations like dh (dear husband), dd (dear daughter), ds (dear son), and BTDT (been there done that) and jargon like ‘sanctimommy’ (a self-righteous mom) and ‘Über-boober’ (a self-righteous mom obsessed with breast-feeding).” All of these are still in use on YBM, and catalogued extensively in the site’s FAQ. Some were familiar to me before discovering YBM, such as BTW for “by the way” or LMAO for “laughing my ass off.” Others were more obscure, such as BPP (“bitter poor person”), CM (“cervical mucus”), and OPK (“ovulation predictor kit”). Puri herself is a SAHP—a “stay-at-home mom.”

Recently a new acronym has emerged: DHASAP, short for “Divorce Him as Soon as Possible,” itself an abbreviation of the longer catchphrase, “Divorce Him ASAP and Find Someone Who Isn’t a Total Loser.” (Good advice, honestly.)

This is a phrase that entered the lexicon, or the group consciousness, as the community aged. “As people’s marriages progress, you see a lot more posts about divorce,” Puri told me. “Somebody started the standard response of ‘Divorce Him ASAP And Find Someone Who Isn’t A Total Loser.’ And it started, I don’t know, maybe a year ago. Because it just became very common, people were posting a lot of things about their husbands. It just caught on and now any time someone complains about their husband, the response is, DHASAP.”

In YBM’s early days, an epithet arose to describe working mothers: “Aunt Mommy,” which referred to a straw-mother who worked so much her children came to believe she was their aunt. Puri, who moderates the site, says she doesn’t see as much abuse from this perspective as she used to. “My guess is that with the combination of the economy and the poster’s children getting older, more and more people are returning to work and you don’t see as many comments like that.”

Still, though, the perennial argument of contemporary motherhood—whether it is better to stay at home or to work—cannot help but arise. “Probably if you watch the board in a 24-hour period, so many of the posts, even if the intention of the post was not to talk about that, they deteriorate to that,” Puri said. She is not impressed with YBM users’ sense of nuance. “They always want it to be very black-and-white, which it isn’t.”

YBM users’ anonymity probably enables some of this vitriol. “I used to use that other site, BabyCenter,” Puri told me. “It’s not anonymous. It’s full of love and hugs and kisses and everybody tries to be very nice to each other. So it’s different.”

Anonymity on the Internet, though, as we are learning, is a complicated proposition. One of the very first things Puri said to me when we spoke was to express that she doesn’t believe there is such a thing, on the Internet, as true anonymity.

“Obviously on the backend we do have users, because you have to log in, so everything you post is attached to your login, but it’s not made public. You can’t see it on there,” Puri told me. “And if you go into the settings you can delete your post history, and then it’s wiped out on the back end too.” Also unlike 4chan, all YBM threads are archived, organized chronologically by year, month, and day.

@moot is showing @pud and me the amazing wonder that is youbemom.com, the 4chan for moms.

Anonymity also enables, or at the very least encourages, more lascivious discussions as well. Seemingly equally as common a fantasy as divorce—or reality, it’s hard to tell the difference when everyone is anonymous—are affairs.

YBM, like most internet fora, has multiple “boards”; YBM’s are organized both thematically and geographically. The overwhelming majority of threads, though, are posted on the “Toddler” board; for one reason or another, the others, like the “Cleveland” board, never really caught on.

“Nobody ever uses those boards. They’re there, but no one ever uses them. So somebody decided, we’re gonna use Cleveland to talk about our relationships with our affairs, and we’re gonna use Pittsburgh to look for affairs.” This went on for a few years before someone’s personal information was shared on the Pittsburgh board; the site administrators decided to shut it down.

Cleveland, though, is still very active.