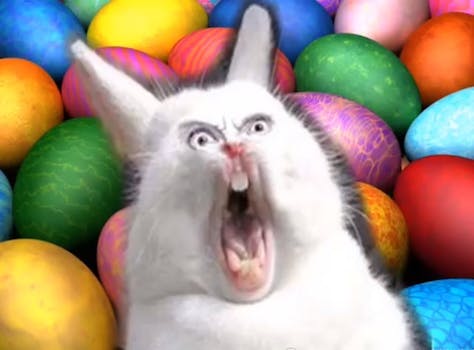 No matter our religious affiliation, we can all agree that Easter is a time to come together, relax, and enjoy annual traditions like the Easter Bunny dancing to Soulja Boy.

No matter our religious affiliation, we can all agree that Easter is a time to come together, relax, and enjoy such annual traditions as the Easter Bunny dancing to Soulja Boy.

While Easter doesn’t get the same overblown recognition that is enjoyed by Christmas, Halloween, Arbor Day, etc., it is still widely celebrated on YouTube—by an army of amateur and potentially insane videographers.

From Peeps candy to egg decoration to even the Easter Bunny itself, no subject is off-limits.

So chew on a few jelly beans and enjoy the stuff of your latest nightmares.

Images of innocent-looking Easter staples open this video, set to the background music of the most beautiful of seasonal offerings: the Trololo song. Just when you have lapsed into a serene sense of springtime magic, things take a turn for the terrifying.

In this stop-motion video featuring a Lego set, the “Ninja Easter Bunny” is played by what appears to be a mutant camera. We see the silent hare unleash its ninja skills on an unsuspecting hunter, which begs the question: who hunts the Easter Bunny?!

3) LastStrawProductions, “What Not to Put in an Easter Egg!!”

Two teenaged boys (presumably the only members of Last Straw Productions) (presumably also the only people who have ever heard of Last Straw Productions) perform a necessary PSA on objects you shouldn’t put into plastic Easter eggs. If you watch this video, then you have no excuse if you hurt yourself or others by planting an egg filled with razor blades, pills, or gonorrhea.

4) urchisweetie, “The easter bunny Hates you”

Have you ever wondered what the Easter Bunny does on the other 364 days of the year? Wonder no more: in this shocking revelation, we see that the fluffy springtime mascot gets his kicks by chasing and pummeling poor, unsuspecting actors with really bad reaction faces.

Next to rabbits and baby chicks, what other animal symbolizes the comforting beauty of Easter? That’s right: rats!

In this home video, a disgusting rat excites its young owners by pawing endlessly through bright yellow plastic grass that typically lines the bottoms of Easter baskets. The owners get particularly—yet unnecessarily—excited when the rat’s hind legs slip on the material.

This is a video of the Easter Bunny dancing to Soulja Boy’s song “Crank Dat” in front of a televised football game.

There’s really not much more that needs to be said.

As an added bonus, pause the video at 36 seconds in for a face that will haunt your dreams for eternity.

As this video plays, it becomes frighteningly obvious what this videographer thinks of his family.

The video ends with an actual cast list, informing the audience—which is collectively poised to dial 911 at that point—that the brief glimpses of the people in the video were actually characters.

The description of this video states that the Easter Hunny Bunny Song is “every kid’s favourite song at Easter time.”

I’m not sure which kids were profiled to arrive at this conclusion, but I know for a fact that showing this song to almost any kid (or adult, for that matter) will petrify them into a permanent stupor.

There’s not much more of a reaction to be had after being faced with a scary rabbit mouthing the words of the melody, which sounds like a really awful anime dub, through a paper mouth.

A young boy who likely hasn’t even reached the age of 10 narrates this video, which expresses his first-world-problems as they pertain to Easter candy.

The kid, who already has “fuck” as part of his vocabulary, bemoans the package of “Marshmallow Treats” he received for the holiday. A discount-store-knockoff of their better-known Peeps counterparts, the small chicks in the Marshmallow Treats all wear extremely derpy faces, some of which haven’t been affixed properly.

The youngster makes short work of pointing this out by zooming the camera in on each one and saying “derpy bird.”

I’ll admit it: this 10-minute video is a little difficult to see through all the way to the end.

Broadcast from some school or public access facility, this video stars a truly dorky-looking kid plucked right out of a late 1980s high school A/V club. He wears obvious self-esteem issues on his sleeve, calling to mind the persona of Butters from South Park; this is evidenced by, among other things, finding a cooking pot and intentionally slamming himself in the head with it.

Our illustrious host is joined by an annoying bunny puppet, an even more annoying frog puppet (wearing—why not?—a stack of paper cups as a hat), and several offscreen voices.

In the video, which required a full painstaking minute of prep time, our hosts attempt to teach children how to dye Easter eggs. In the middle of the recording, for some reason, he invites viewers to “call in” to the show with their questions or comments. Even though no one takes him up on this offer, a title is superimposed over the plea stating that this was a pre-recorded program and that current viewers should please not call.

In this video, another slew of horrible actors find themselves unwitting victims of the biggest horror known to man: a giant, killer, mostly-offscreen piece of Peeps candy.

The Peep is played by a graphic that looks more at home on Perez Hilton’s site than it does in any horror film, even the truly awful ones.

Combining the beautiful holiday of Easter with the most-exploited video game franchise this side of Pokemon, Super Mario’s Easter examines what would happen if Bowser decided to hire Wario and Waluigi to kidnap the Easter Bunny.

It’s obvious that the filmmaker really just wanted to showcase his desire to have his Super Mario plushies beat the crap out of each other and make thinly veiled sexual references in between such battles. This is a shame, as audiences will never be able to see a truly artistic portrayal of two-dimensional video game characters marking a subpar holiday.