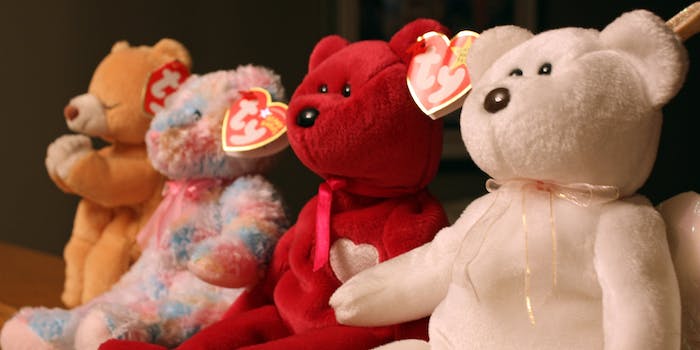 A brief word from Ty Warner, the creator of Beanie Babies

Some dreams die—but delusion is forever.

My name is Ty Warner.* I brought the Beanie Baby into this world. To prove it, here’s a picture of me buried underneath some of my Babies: 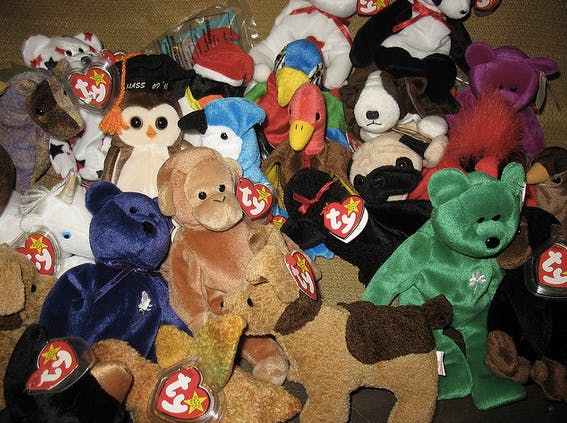 When these plush critters had their heyday, I convinced a great many people to put their faith in the Prophecy of the Beanie Baby. I affectionately refer to these blind followers as Beaninites. The Prophecy foretold that one day in the nearish future, my Babies would be worth substantially (thousands upon thousands of dollars!) more than their retail price.

Why? Well, it could have been my limited availability strategy. I’d sometimes release special edition Babies to encourage competition and hoarding. Or maybe Freud was onto something when he associated the root of hobby collections with sex and toilet training and childhood.

Or perhaps people believed in the investment potential for my small, bean-bagged animals due to the economic logic that allows new creations to assert magical, transcendent qualities that defy all reason, and the fact that the results of such baseless speculation are enhanced when others similarly perceive an object to have inherent value. Or maybe the general public was engaged in groupthink and collective delusion. (Hint: it’s the last one!)

I finally decided to speak publicly about this because I’m trying to distract myself from other pressing concerns—like my whole “not paying taxes” thing—and also because I recently came across this headline: “Rarest Beanie Baby bought for just £10 at car boot sale could be sold for £62,500 on eBay.” I can no longer let this charade continue, even though I used to believe in the Prophecy myself, just like you and this Scholastic book: Hell, even BuzzFeed, that website that has a bunch of content that’s apparently not that thoroughly edited, believed in the Prophecy as recently as September 2013. The astronomical “Buy It Now” asking prices on eBay for limited edition Beanie Babies—sums which no human has ever actually paid for a stuffed animal—have successfully duped the clueless general public and perpetuated the myth of the Prophecy for decades!

The Prophecy, I should mention, came to me during a mushroom trip in which all of my Babies lamented that they were just a passing fad with no lasting value. I swore to them that we—all of us—would grow in value over time, and I kept that promise until the next day, when the shrooms wore off. After that fateful turn of events, I decided that if I couldn’t force my Babies to actually increase in value, then I’d simply exploit the general public’s extreme capacity to digest bullshit—and so I did. Am I proud of it? I mean, kind of. Have you met the general public?

I am a good philanthropist-type person, though, so I believe you deserve to know the truth: None of your Beanie Babies are worth very much. Even my favorite Baby, the First Edition Princess Diana purple bear, recently sold for just £72 on eBay. And yes, this is the same bear that U.K. couple thinks is worth £62,500, though it looks like they reduced their asking price to £25,000 before removing or relisting my favey Baby. I suppose eBay is the last refuge of True Believers, but even this last bastion of hope cannot last.

If these various links still don’t convince you to evict the Beanie Babies taking up space in your basement, then all I can do is show you this photograph of a real adult couple dividing up their Beanie Baby collection in front of a judge as part of their divorce settlement in 1999. It makes me really sad, and might almost make me regret becoming a billionaire with my overhyped bean bag animals. Almost.

I know that once you become a lapsed Beaninite, there’s going to be a hole in your heart. You will understandably need to fill your life with meaning again. Might I suggest becoming a believer in Vin Diesel’s Facebook page? And if your new belief system requires the presence of my Babies, read this book, and maybe you could come to believe in the research this writer has done on me and my Babies. But I’d understand if you don’t.

You could also try believing in the reality of something important to civilization at large, a condition that quantifiably impedes societal equality, or that you’re not nearly as decent a person as you might assume. Or not. The choice is yours. I’ll be sitting pretty either way. LOL. 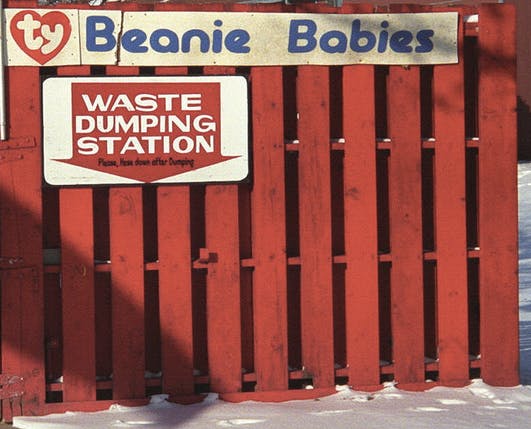 *Ty Warner did not write this. Or say this. Or, presumably, ever think this.

Photo via Dominique Godbout/Flickr (CC BY 2.0)