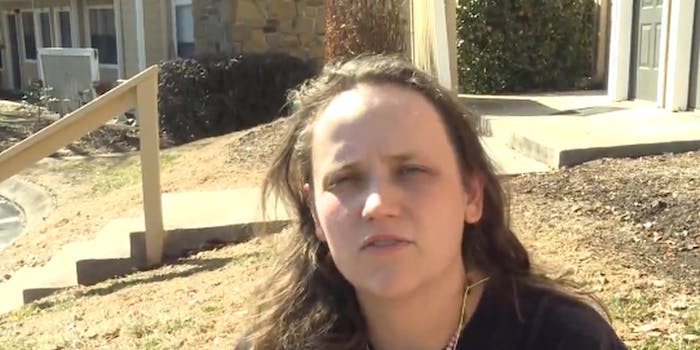 A Tennessee woman wanted for the murder of her mother showed up during a live report discussing the homicide to confess to the killing.

A Tennessee woman wanted for the murder of her mother showed up during a live report discussing the homicide to confess to the killing.

She said she did it because her mother was the ringleader of a “satanic cult within the city” that “has been casting satanic spells on [her] for three or four days.”

The woman’s name is Katie Nichols. On Wednesday she stabbed her 61-year-old mother after she saw “symbolic representations” of her and her daughter’s imminent deaths.

“I had to kill her,” she told Knoxville’s CBS affiliate. “She was going to kill both of us.”

Nichols appears noticeably sedated during the interview, which came by way of channel 8’s Hilary Magacs, and she didn’t try to leave the scene after Magacs ran her questions by her. Instead, she sat outside her mother’s home as Magacs called the police. She was arrested Nichols on sight.