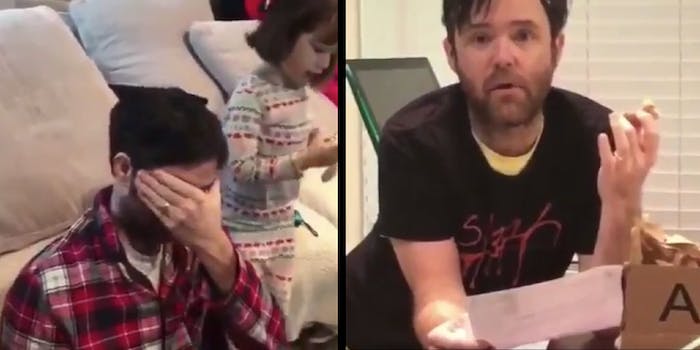 You oughta know how to ‘Morissette’ your significant other to tears

Actress Lisa Rieffel discovered a foolproof way to drive your loved ones insane.

Rieffel found the ultimate form of spousal torment: she unrelentingly sang Alanis Morissette’s “You Oughta Know” at random, inopportune moments for over a month.

Fortunately, Rieffel collected footage throughout the month of her husband’s reactions, so viewers get to watch Dunn slowly move from intentionally ignoring his wife as she belts out the song lyrics to actually begging her to “please stop” by the end of the month.

My poor, poor husband.
I “Morissetted” him for over a month.
But let me ask you this, how the hell could I ever stop? pic.twitter.com/R6UVdjmHuL

Since the video was first shared on March 21, it has been watched over 1.5 million times on Twitter. Rieffel has already left an impact on a few marriages, with women tweeting to the actress that they’ve begun to “Morissette” their partners, too.

Thank you so much. My co-workers and I have been annoying our husbands all day and made this into a challenge. Thanks for the laughter

Lisa! You’re all grown up and making me laugh SO HARD. I may steal this and “Morisette” someone I love.

i did this to my boyfriend, he asked why i’m like this pic.twitter.com/uMn1mpi3Fe

Others have pointed out just how amazingly Rieffel nails her Morissette impression.

Meanwhile, Dunn has been responding to his wife and other folks on Twitter in the best way possible.