And she’s never lost a button.

The South Wales Evening Post broke the big U.K. news story of the day: An elderly local resident has been wearing the same cardigan for 54 years.

Pam Hopkins’s jumper has remained in “pristine” condition for over five decades. “It has never lost a button,” she says, “and is still intact since it was given to me.” 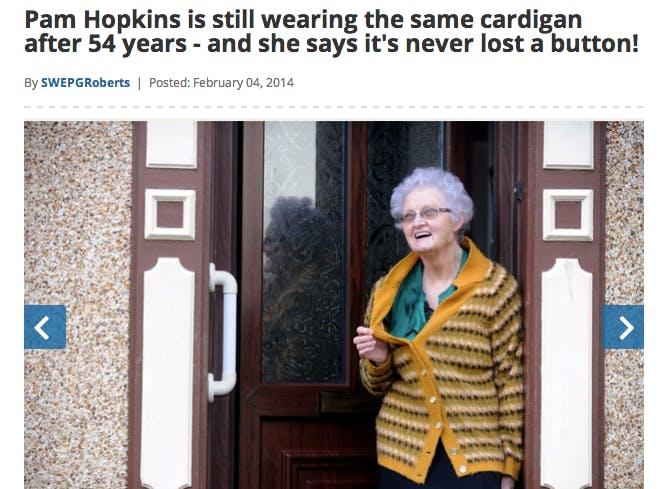 The 75-year-old resident of Llwyn Crwn Road in Swansea, Wales, thinks that the cozy knit jumper may originate from the department store Lewis Lewis.

“Years ago you would just get all the posh shops. I think it has worn quite well … I still wear it after all these years.”

The South Wales Evening Post even has an image gallery on their site, which, purposefully or not, cycles through identical photographs of Pam Hopkins in her famous cardigan.

Realising that they had a scoop on their hands, the local paper decided to tweet the story as breaking news:

Hold the front page, news story of the year! https://t.co/7TtdCoEFau

The Evening Post clearly realized the importance of the story. On Twitter, a reader suggested a special souvenir issue:

Surely the woman in Wales with a 54-year-old cardigan is worth a Times front page wrap tomorrow… pic.twitter.com/GjoMGE7AlV

Hopkins bested another local celebrity: this Scottish dad whose sweater is a measly 34 years old.

Page 15 of today’s Sunday Mail is this. pic.twitter.com/PytsQD98C0