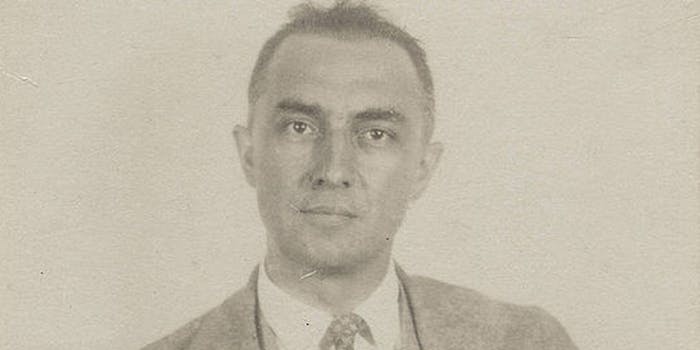 Why this William Carlos Williams poem is the perfect meme

Even readers unfamiliar with 20th century poetry will find something familiar about William Carlos Williams’ “This Is Just To Say,” first published in 1934. That’s in part because it takes the form of a decidedly domestic, dashed-off refrigerator note to a spouse, and also in part because it’s become part of the canon, endlessly reproduced and anthologized: 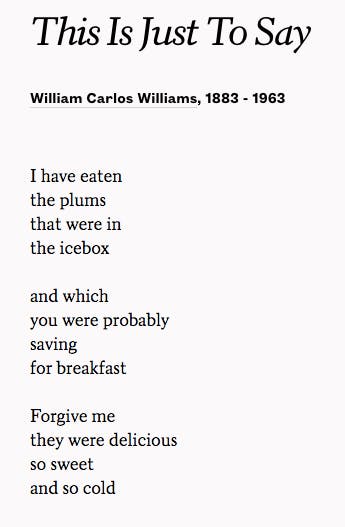 Twitter, meanwhile, with its strict character limit and formatting challenges, makes users hyperaware of poetic concerns that occupied Williams and others associated with Imagism—clarity and economy of language. So while some more irreverent Twitter poets have skewed toward jokes pinned on elementary rhyme schemes, others have turned to parodies of Williams’ work that trade on its ambiguous tone for faux profundity.

This is just to say

I have opened
the investigation
that was closed in July

and which
you were probably
saving
for Clinton's inauguration

I have eaten
the plums
that were in
the icebox

Forgive me
I needed a distraction
from Illinois
And Rutgers

A couple of line breaks, stanzas fashioned into similar compact shape, the barely intentional resistance to metrical prosody that gives the poem its unvarnished feel—taken together, it’s less a mockery of Williams than it is of Twitter itself, although Know Your Meme notes that the poem’s “spoofable qualities” were pointed out back in the 1960s and have been exploited ever since. Still, there’s no denying that Twitter provides an ideal platform for it: There’s even a bot that spits these out at regular intervals, distorting Williams’ recognizable kitchen into something wildly abstract.

I have eaten
the dictators
that were in
the expression

Forgive me
They were brassy
so crabby
and so paving

I have surprised
the inks
that were in
the burglar

Forgive me
They were stereo
so thin
and so strap

I have impaired
the heads
that were in
the tunnel

Forgive me
They were symbolic
so burnt
and so twice

Yet there’s something over and beyond the formal qualities of “This Is Just To Say” that make it so funny to play with. Perhaps it’s that Williams hasn’t actually apologized for eating the plums—he only asks for forgiveness. Could he have been some 80 years ahead of the #SorryNotSorry trend?

I have eaten
the Soylent Bars
in your pantry

which
you were probably
saving

Forgive me
I have uncontrollable diarrhea

Left my car for maybe 15 minutes in front of the dorms and I come back to this. College man pic.twitter.com/KlDx5BtXLX

and which
you were probably
saving
for snack time

Forgive me
I was totally
freaked out
about the debate

Moreover, amid the pounding pulse of social media, there’s an overwhelming pressure to land one’s joke before someone else can make it. By continually referencing the Williams poem, one achieves a dual effect, emphasizing the internet’s anxiety of originality (and whatever drives people to comment “First!!” or “in b4 virals!!” on YouTube videos) while shamelessly recycling old, old material, thereby running it into the ground.

I have eaten
the best minds
that were in
your generation

Forgive me
they were starving
so hysterical
and so naked

With those contradictory forces at play—and an atypical interest in modernist art—it’s no surprise some observers are confused. But that, too, is in the very nature of poetry: It bewilders even as it explains.

Why is everybody re-writing WCW's "This is just to say …" I feel like I'm missing something here pic.twitter.com/ZNf5L72VpR

Well, Ellen, the truth is, there’s nothing to miss. People simply figured out an easy way to fuse two media that turned out to have a surprising amount in common, and they’re striving to make friends laugh in the process. Some of them are real poets, and some of them are pretending to be—but what’s the difference, really? The music of the word rings out regardless.

This is just to say:

with a joke that’s

it was so obvious