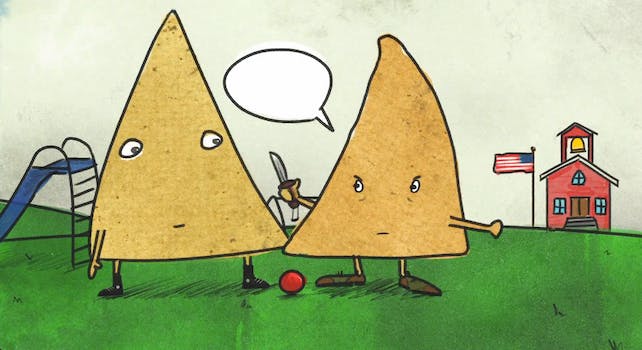 If you plan to get drunk tonight or this weekend or anytime soon, take note: Any joke you tell under the influence will be even funnier once you add visuals.

If you plan to get drunk tonight or this weekend or anytime soon, take note: Any joke you tell under the influence will be even funnier once you add visuals.

Adam Patch, an animator based in San Francisco and Boston, did just that when when he created a cartoon to accompany his wife Morgan’s drunken joke.

Morgan drank a bottle of wine on March 23 and shared the joke, about corn chips who are friends, with her husband. He had the good sense to record the conversation. Using her audio, he created the layers for the short in Photoshop and animated it in After Effects.

Spoken in a soft voice, the chip joke is about as cheesy as anything your parents ever told you.

In any other context, it would be terrible. Everyone would groan at the punchline and the joke-teller may regret bringing it up. But when you tell the joke while drunk (even without a raised voice) and crack up at the pun quicker than a bird pecking at a chip, it’s not just hilarious, it’s endearing.

Speaking to viewers in the comments, Adam mentioned that he is interested in animating more of his wife’s drunken jokes.

“I’m working on getting her drunk enough for episode 2 ;),” he said.

Morgan will have a bowl of supporters. (Sorry, I had to.)