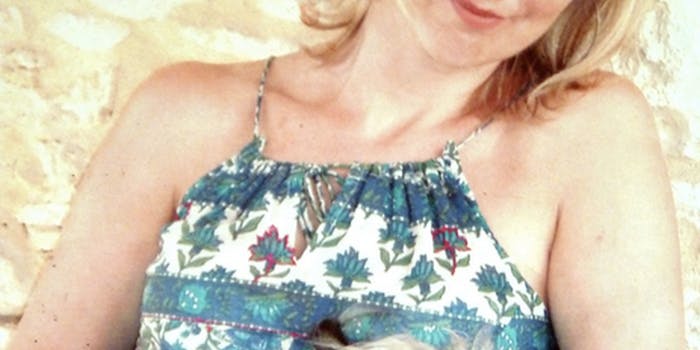 After proclaiming that other women were jealous of her beauty, the U.K. journalist felt the scorn of the Internet.

“Don’t hate me because I’m beautiful,” Samantha Brick seemed to ask the world in a recent article.

But that’s not why people hate her.

After the 41-year-old Daily Mail journalist wrote an article decrying the downside of being so ridiculously good looking, she became an overnight sensation for all the wrong reasons.

The article featured dozens of glamour shots of Brick along with anecdotes about her difficulties getting along with other women who are far less attractive than she:

“While I’m no Elle Macpherson, I’m tall, slim, blonde and, so I’m often told, a good-looking woman. I know how lucky I am. But there are downsides to being pretty—the main one being that other women hate me for no other reason than my lovely looks.”

Readers worldwide have decried Brick as everything from “pompous” to “delusional.”

“Um… a belated April Fool’s prank? I mean… she’s pleasant looking, but I think perhaps her image of herself may be a little… distorted,” wrote one commenter on the article.

After the article ran on Monday, the U.K. newspaper received over 1.5 million hits on the story, and more than 5,000 comments. Brick’s name became a trending Twitter topic, leading to threats, name-calling, and the comedic Twitter hashtag, #samanthabrickfacts.

Brick has responded to the backlash with a follow-up article, in which she insisted “this bile just proves I’m right.” However, in the midst of her 2,000-word tirade, she said it hasn’t all been bad:

“I’m know I’m risking the wrath of the online community once more, but there is an irony to yesterday. While I was tearfully dealing with the emails and calls outside the supermarket, a young man approached me, offered to park my car and even get me a coffee. He could see I was having a tough time—and yes, my looks had helped me out again.”

Looks can be deceiving—especially online—but not all the hateful comments in the world can deny results like that.