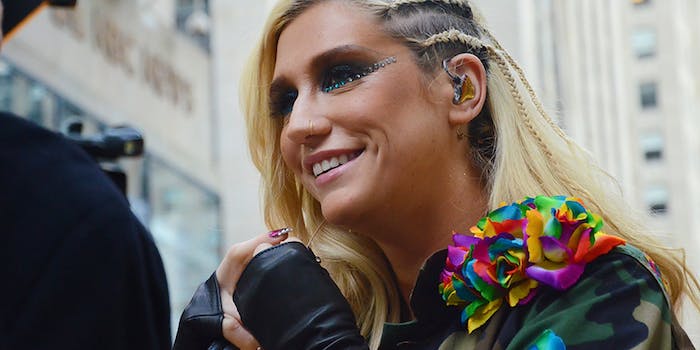 Why the music industry (not just Taylor Swift) should support Kesha

This could be a turning point for women in the music industry.

New York Supreme Court Justice Shirley Kornreich dealt Kesha a devastating loss in court last week when she refused to grant an injunction allowing her to record music independently of producer Lukasz Gottwald, aka. Dr. Luke. Claiming that the producer had subjected her to sexual and emotional abuse (which he has denied), the singer pleaded to be released from her contractual obligations, but the judge argued that the request was unreasonable, especially in light of insufficient evidence.

The case has outraged the Internet, and could become the breaking point for something critical: Justice for sexually abused women in the music industry.

Sexual and emotional abuse is depressingly common for women in the entertainment industry in general, and the music industry in particular. The consequences for women who speak out about it have been severe. In 2015, for example, when Jackie Fox spoke out about the sexual abuse she experienced while she was a member of the Runaways, she was roundly abused in many corners of the industry. Even rock legend Joan Jett made a depressingly dismissive statement on the subject.

Sexual and emotional abuse is depressingly common for women in the entertainment industry in general, and the music industry in particular.

For women in any industry, sexism and misogyny are rampant, but in entertainment, they come with an especially bitter twist: The careers of actresses and musicians generally have a very short shelf life, thanks to the repressive social attitudes surrounding sexual attractiveness and visible appeal. Women like Madonna are the exception, not the rule, with most older pop stars fading into obscurity once the sheen wears off. This is, in fact, one of the key issues Kesha raised in her suit: If she can’t resume recording in the very near future, her career could be over.

A silence has traditionally surrounded sexual assault, though, with many women afraid to speak out lest they be branded as sluts, attention seekers, or people who are difficult to work with. Consequently, women who experience abuse often do so in extreme isolation, unaware that other women are in the same position. The slow reveal of sexual assault accusations against director Roman Polanski and comedian Bill Cosby’s accusers is a classic example of the domino effect that silence can create, but it also illustrates what happens when victims start to speak out. Sometimes all it takes is one woman breaking the silence and opening up about her experience to create a movement.

In this case, it did. People took to social media to demand that the judge #FreeKesha. In addition to ordinary fans, this included incredibly high-profile people in the industry, particularly women, who spoke from bitter experience in their expressions of solidarity. Taylor Swift notably pledged $250,000 to Kesha’s continued legal fight, and while it’s not the same thing as a public statement of solidarity, she’s definitely put a lot of money on the line to support her fellow artist. Other artists including Lorde, Lady Gaga, Best Coast, Kelly Clarkson, Ariana Grande, Margaret Cho, and Wale also spoke out. Actress Mara Wilson had a particularly biting comment:

There's a quote, I believe from John Fogerty: "The music industry is so corrupt it makes Hollywood look like a charity organization." #Kesha

This flood of support is dramatic, and it represents the convergence of several social factors that connected with each other at precisely the right moment. Kesha came forward at a time when allegations of sexual abuse in entertainment have been picking up steam—Swift herself recently filed a sexual harassment suit—and her case added to the growing body of evidence that this is a systemic problem. Her decision to not only speak out but actively file suit on the grounds that her alleged abuser was ruining her career was incredibly courageous, and groundbreaking.

She’s also speaking out at a time when social media is exploding, with more and more communities using sites like Twitter for online organizing and solidarity work. The hashtag creates a quick, simple, readily accessible medium for organizing and coalescing thoughts. Instead of shouting into the void, people are raising their voices together on social media, which sends a distinctly powerful message. This isn’t about a handful of people who read the entertainment dailies, and it’s gone beyond inside baseball—Kesha’s case has exploded into the mainstream, grabbing the attention of women in entertainment, feminists, activists, and many more with an investment in one or more angles of the issue.

Kesha is speaking out at a moment where society in general is starting to have serious, aggressive conversations about rape and sexual abuse.

Moreover, Kesha is speaking out at a moment where society in general is starting to have serious, aggressive conversations about rape and sexual abuse. College students are rising up to put the campus rape crisis squarely in the headlights. Activists are demanding to know why the system for handling rape reports is so shoddy. A backlog of thousands of untested rape kits highlights the historical contempt with which law enforcement viewed victims, and that’s changing.

Kesha’s case is a stark illustration of the “Why didn’t she report it?” phenomenon—the young artist knew that if she spoke out about the alleged assault at the time of the incident, her career would likely be torpedoed. With more leverage, and an unwillingness to stay silent any longer, she’s taking to the court in search of justice that law enforcement might have denied her, and that the industry definitely would. In a culture where some believe that sexual harassment is the “cost of doing business” and one where female stars are heavily sexualized, Kesha is demanding that fans and critics alike pay attention to abuse.

This isn’t just about Kesha, or about a judge who said it was “commercially reasonable” to compel an artist to work with her alleged rapist simply because he’d invested substantial funds in her career. It’s about opening up the industry to public scrutiny and openly discussing issues that have remained in the shadows—while people have long made scathing comments about sexualized “groupies” and the industry being about “who you know and who you blow,” implying that sexual favors are not just routine, but acceptable, Kesha has fired a powerful warning shot.

If the movement to #FreeKesha results in a successful resolution, women in entertainment are going to see something very different. They’re going to see a woman who endured abuse, fought it, and won. Her fight is critical because it represents the possibility of justice for thousands of women who will gain courage through Kesha’s actions, and because it will lay the groundwork for major shifts in the way the industry does business.

S.E. Smith is a writer, editor, and agitator who serves as the social justice editor for xoJane and has been published in the Guardian and Salon, along with several anthologies. Follow her on Twitter @realsesmith.