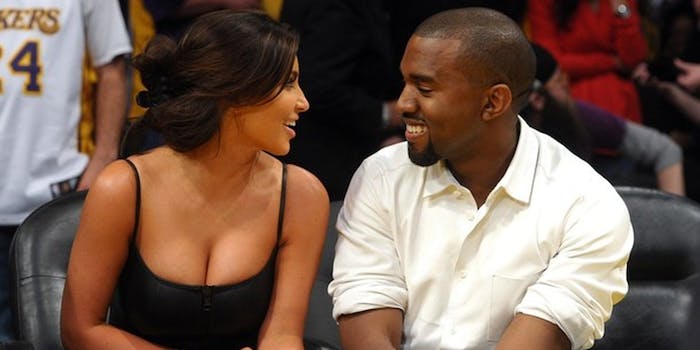 What the backlash to Kimye’s Vogue cover says about us

Whether you like it or not, there's no reason that Kimye shouldn't be in Vogue.

I get it, you find Kim Kardashian and Kanye West annoying. “She’s famous for nothing!” you may say. “He’s such an egomaniac!” you shout.

I can’t disagree about him being an egomaniac. Though of course neither you nor I actually know if he is, because (I assume) neither of us knows him personally. We’re judging him on his public persona, the one he puts out there to help make himself super famous. He’s a public guy, he says things and does stuff in front of cameras, and most of it is probably pretty well-orchestrated. He’s a smart guy, after all.

But Kanye West is a talented and influential dude, and nobody can strip that from him. I remember the first time I heard a Kanye West song. It was in a music class at UCLA (yes, I first heard Kanye West at the hands of a professor at one of the most distinguished public institutions in America) and the professor said, “This is a man that is going to change the way we see music forever.”

If you haven’t listened hard to anything by West, take a moment to listen to “Jesus Walks” and tell me that it isn’t a truly revolutionary song. Every element is purposeful. What do the backing vocals sound like? Why does it have such a deep Christian message? Is it truly a Christian message? Why is the N-word shouted out like that? Why are kids singing in the background? None of it is an accident and the song is full of layers and layers and layers of allusion to Black history and the daily political implications of being Black in America.

I’ll admit that I could very well not know what I’m talking about. I’m an upper-middle class White woman who isn’t a music scholar. But I want you to listen to that one song, and then dive into the entire College Dropout album before you say that he somehow doesn’t deserve the credit he’s given as a musician and a producer.

And Kim Kardashian is a style icon whether you like it or not. For years she’s been featured on the covers of fashion and style magazines, and there isn’t a tabloid on the stands that doesn’t have some mention of what she’s wearing. She had a high-end women’s clothing store in one of the wealthiest suburbs of Los Angeles before she had a television show, and has been known for her style and fashion influence for a long time.

But somehow she and her fiancé don’t deserve the Vogue cover?

Maybe you’re mad because they’re always seeking attention. Of course they are. Who in the entertainment industry isn’t? Sure, we have a few hermit-like celebrities in this country. Bill Murray comes to mind; he only does the press he wants to do, he doesn’t do appearances at clubs, he doesn’t even have your standard talent or press agents. But he’s also a lot older, and part of a totally different generation of actors and comedians than what we have today.

But what about everyone else who’s been on the cover of Vogue? Rihanna, she seeks out attention. She does press and media appearances. She dresses up gorgeous and sexy and does stuff to gain the media’s notice. As The Belle Jar’s Anne Thériault says, “If I hear one more person accuse her of ‘wanting attention’ and ‘being famous for nothing,’ I’m going to flip a table.” She is famous for her style and is regularly photographed by paparazzi and makes appearances is fashion and celebrity magazines. Lena Dunham, also gorgeous and sexy, does press and media appearances and is famous for her fashion and style choices (albeit in a different way).

I could go on, the list is really long. In fact, Vogue covers now mostly feature celebrities instead of fashion models, and much of Vogue is dedicated to celebrity style and profiles. Less so than other style mags, but without celebrity stuff, there would be a good number fewer pages in fashion’s Bible.

So who does and doesn’t deserve to be in Vogue? As Larry Womack, a former editor at both Huffington Post and RawStory.com, explains, “The reaction [to the Vogue cover] shows an insane lack of perspective. The fashion industry is a haven for sexual predators, bigots and generally terrible people. Nobody throws a fit when they’re featured in Vogue. But a reality TV star? That is to be condemned.”

My final question his this: Why isn’t mainstream and social media looking at the culturally important aspects of this “Kimye” cover?

When a bi-racial family appeared in a Cheerios ad, the world was cheering. But not on Vogue. No, not this multi-racial family. They are not good enough for us! But why not?

As Daniel D’Addario explained in his Salon piece, the public has a very specific idea of who belongs on Vogue, and it’s often based upon a very thin, white version of beauty.

Doubters aside, Kardashian should have been on the cover of Vogue months before. The world’s Sienna Millers are the women who are “supposed” to be on Vogue, and any time that mold is broken, it should be cause for celebration. Who would you rather read about, a character actress from a movie you half-remember or a woman at the very center of the culture? Vogue generally gets representation wrong. They airbrushed Adele and Kate Winslet beyond recognition in recent memory, and the last time a black man and white woman appeared together on the cover was a (perhaps subconscious) visual nod to King Kong. To see Kardashian looking like herself, and looking happy and in love, on this cover is refreshing.

Is Kim’s fashion influence something that can be denied? Her clothing store was successful before Keeping Up With The Kardashians was on the air, and the Kardashian family used that platform to launch their many fashion and beauty brands into the stratosphere.

And isn’t that what Vogue is about? Fashion, style, and celebrity?

So tell me again why Kim Kardashian and Kanye West don’t belong on its cover?