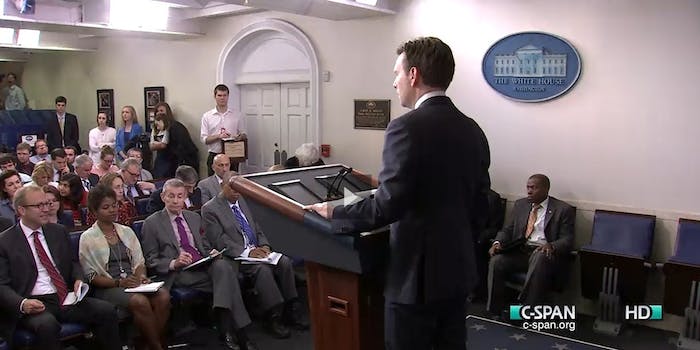 Still, she won't end up the most unintentionally famous intern to ever work in the White House.

One White House intern learned just how overwhelming the atmosphere in Washington can be.

On June 24, just after White House spokesperson Josh Earnest concluded a briefing, a C-SPAN camera situated behind the podium caught an unidentified intern suddenly slump to the side and collapse to the floor.

“Oh goodness,” Earnest said as commotion filled the room. “Why don’t we wrap it up and we’ll bring some water out here.”

The video ends with Earnest, Deputy Press Secretary Eric Scultz, and others in the room assisting the intern to her feet.

It certainly has been a bumpy ride for Earnest’s first few days behind the podium. Yesterday, during his debut address, he got involved in a small scuffle with several reporters.

While the intern may become a minor Internet celebrity, it’s safe to say she won’t end up the most unintentionally famous intern to ever work in the White House.