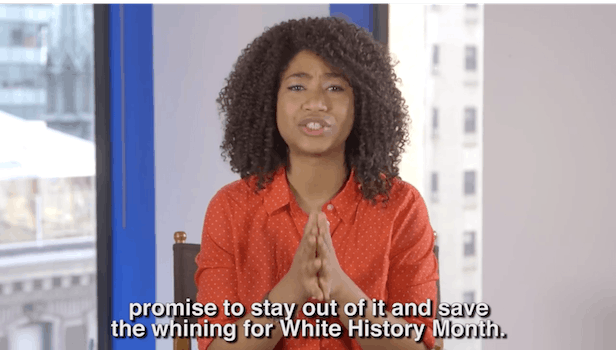 How else are we going to celebrate Kenny G?

Black History Month may be the shortest month of the year, but that doesn’t stop trolls and white supremacists from coming out in droves every year to decry its existence on the Internet.

New York-based comedian Tiara Francis was tired of the same old vitriol, so this year she teamed up with Internet Action Force and took a new approach. Instead of going to bat for her right to have a Black History Month, she decided to flip the argument on its head.

Francis told the Daily Dot, “Every February, I see people on Twitter and other social media saying that Black History Month is racist. This year was particularly bad with the whole #OscarsSoWhite thing and Stacey Dash going on Fox News to say that there shouldn’t be BET or Black History Month if black people want fair representation, which doesn’t make any sense at all. I wanted to respond to all of that. But, instead of trying to prove how awesome black people are, I thought, what about giving those people who ask, ‘Why isn’t there a White History Month?’ what they want. What would that look like?”

It looks like a month filled with Friends, Titanic, and the smooth musical stylings of Kenny G.