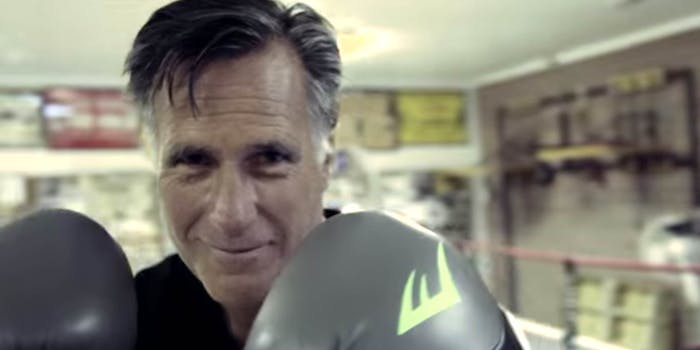 Mitt Romney is going to box Evander Holyfield—like, for real

Here's how to watch.

“Every champion was once a contender that refused to give up,” according to Rocky Balboa; and if there’s anyone who knows about refusing to give up, it’s former Massachusetts governor and 2012 Republican presidential nominee Mitt Romney.

Taking Balboa’s words to heart, the 68-year old Romney will be stepping into a literal boxing ring Friday night to face the former world heavyweight champion Evander Holyfield—who in no way will give 110 percent Friday lest he face killing a former state governor.

You may think Romney’s bitten off more than he can chew—in fact, there are already a ton of ear-biting jokes coming from his corner, but the fight’s for a good cause. The bout is expected to raise $1 million for Charity Vision, a nonprofit organization that helps people with vision problems in developing countries. The money is expected to go toward medical equipment, surgeries, screenings, and medical training, NPR reports.

What planet am I on pic.twitter.com/EizTbiruSG

In the promo video, you can watch Romney as he works up a sweat in the gym, and Holyfield shows off his fitness prowess with some back extensions and heavy bent-over row, as he asks, “Does [Mitt] even work out?” The champ’s still got it!

Maybe Romney has a chance, just so long as he brings at least 47 percent of his game.

Oh and yes, you can livestream the fight via Periscope.