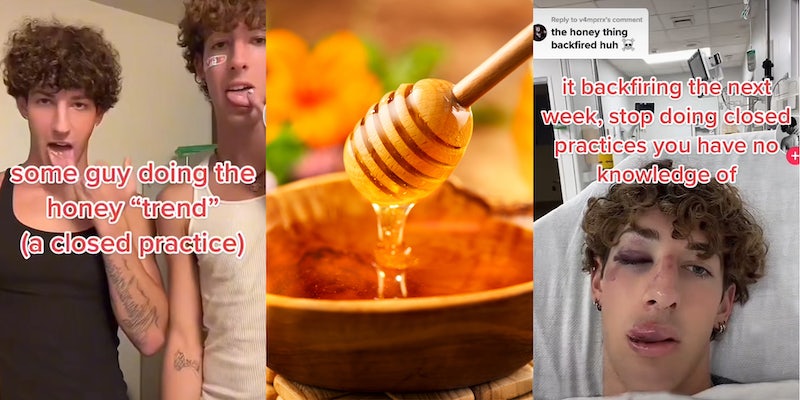 What is the viral TikTok honey spell and why are people calling it dangerous?

As part of brujería, a closed practice, its believed that non-Hispanics who do the honey trend are likely to have it backfire on them.

The honey trend is the newest viral WitchTok practice to take off on the app. Featuring users drawing a cross on their tongues with honey, most videos don’t actually explain the purpose behind it. So what is the honey trend actually meant to achieve, and why are some users calling it dangerous?

The honey trend is a form of love magic/manifestation, cast by thinking about the person whose feelings you want to “sweeten” towards you while drawing a cross on your tongue in the honey. Some versions include a spell or chant said afterward but this seems to be optional.

Supposedly, the spell featured in the honey trend is a good way to make someone obsessed with you, sweeten their words towards you, and make yours seem sweeter to them, as well as deepen any feelings towards you they may already have. However, in addition to the usual debate over ethical issues that always comes up with these kinds of love spells, there’s a cultural issue at play here, with people warning others outside of it not to mess with things that don’t belong to them.

The honey trend isn’t just another WitchTok Neo-pagan creation. Drawing a cross in honey on your tongue in order to induce positive, obsessive, or loving feelings in another person is a traditional Hispanic magical practice—and in addition to the issues around cultural appropriation, it’s believed by many practitioners that it’s dangerous for non-Hispanic or Latino people to attempt to use this kind of magic.

According to many Hispanic creators, non-Hispanic people who attempt to perform the honey trend’s magic are likely to experience a negative outcome, whether that’s inducing the opposite effect of the spell’s intentions or otherwise coming to harm in some way.

Some are pointing to the Brickeen twins as an example of this, as one twin was reportedly assaulted and hospitalized days after the twins did the “challenge.” However, both twins maintain it had nothing to do with the honey trend, repeating the spell multiple times on TikTok in an attempt to prove this.

The Daily Dot has reached out to the Brickeen brothers for comment and will update if they respond.