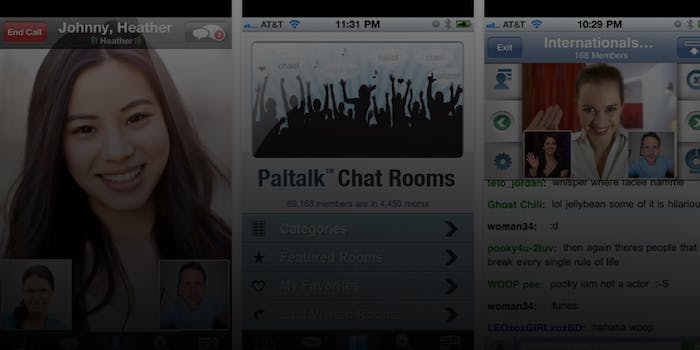 What is PalTalk, and why is the NSA spying on it?

Microsoft, Yahoo, Google, Facebook, PalTalk, AOL, Skype, YouTube, Apple. Eight of these brands are (in)famous. One is not.

There was something amiss about the National Security Administration’s description of their tactics and targets in scanning Internet data, as related by the Washington Post: “Collection directly from the servers of these U.S. Service Providers: Microsoft, Yahoo, Google, Facebook, PalTalk, AOL, Skype, YouTube, Apple.” Eight of these brands are (in)famous. One is not.

Just what is PalTalk, and why are intelligence agencies listening in on it?

PalTalk is a hub for online video chat. That’s it. Hardly a groundbreaking proposition, and certainly not much to look at, as I found out. On Saturday afternoon I registered with the username “millionbear” and quickly found that my profile could go into some detail, if I liked: there were fields for sexual orientation, religion, nationality, ethnicity, and finally what I was “seeking.” Options ranged from “Friendship/Pals” to “Love & Romance” to plain old “Intimacy.”

The profile page encouraged me to check out PalTalk’s chat groups, as I wasn’t yet a member of any. I clicked over to find that currently, 4,388 chat rooms were open. PalTalk had rounded up a matrix of “Popular Free Chat Rooms” I might enjoy; what I had signed up for was PalTalk Express, which is bereft of the more advanced features mentioned below.

Each room appeared with a user-generated star rating of one to five, along with an up-to-date headcount. Some had a “best friends” or “nightclub” theme, and one was called “Indonesia Free Parking.” The latter didn’t load at all, so I tried to join a room titled “The Hole,” which seemed to promise highly sexualized content. That didn’t work either. Then the whole site seemed to crash, though I noticed the ads—“1 Tip of a Flat Belly”—were still flashing.

I got the homepage to load again, after struggling mightily, then blundered my way to a different list of chat rooms that seemed more text-based, if still augmented by video and audio; PalTalk’s point of pride is in blending these three elements. These rooms had the ugly interface of classic AOL chatrooms, and the same confusion, with additional video thumbnails of the participants.

There were rooms to discuss the music of the 1980s and to flirt, of course, but one of the more interesting applications of this technology came in a room where non-native speakers could practice their English. I watched as one user typed “Do you treat your parents with deference?” and another user carefully enunciated the sentence into his microphone, presumably from thousands of miles away.

With 4 million users, PalTalk is no Twitter. It’s not even a Tumblr. But it has a strongly international bent, which could be part of why the NSA and FBI are interested. It seems to have been a strong connector of people during the Arab Spring, and Foreign Policy noted that the men who plotted to bomb the London Stock Exchange last year allegedly relied on the service.

While Skype, which would seem PalTalk’s closest competitor, is often about keeping tabs on old and distant friends, PalTalk wants you to meet new people. Think of it as a real-time OkCupid, where your image is continually broadcasted, and most people’s public data invites a romantic overture. The ability to simply “Browse Members” by profile, view their photos and send them private messages gives the site a stalker sheen that even Facebook can’t match—even if no one uses their real name.

As with Facebook, you can collect friends as well as interests and meaningless virtual gifts. You can also make free conference video calls of up to ten minutes. There’s a file-sharing function. A mobile app. VoIP chat. An IM option that gives you access to friends who are on Google Talk, MSN, ICQ, AOL, Facebook, and Yahoo… all at once. You can also create a private chat room for your own site. None of it works too well, though I was assured that 77,490 people were using PalTalk, one way or another, right then.

One supposes that some crucial intelligence may pass between any two of those people, in part because PalTalk is so obscure and feels, despite its unwieldy stack of 21st-century features, like something excavated by Internet archaeologists. If terrorists or arms dealers communicated via this technology, its wonkiness and MySpacean signal-to-noise ratio might indeed work in their favor. Anyone trying to pull useful data off these servers has their work cut out for them.