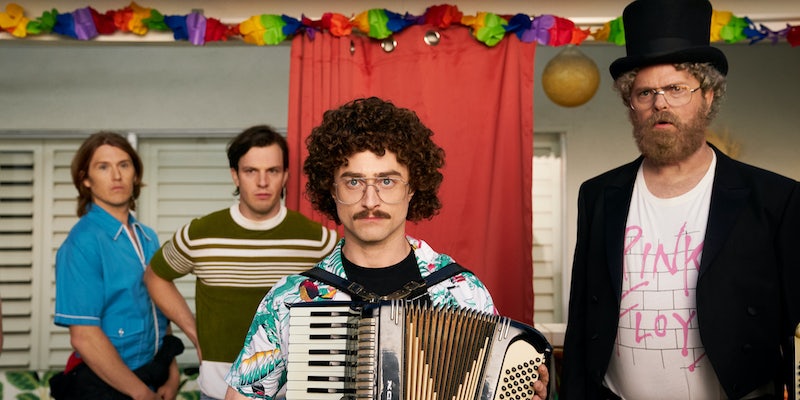 Courtesy of the Roku Channel

It hits many of the same beats as 'Walk Hard' but is still a delightful skewering of a stale subgenre.

In hindsight, it’s perhaps fitting that a biopic about “Weird Al” Yankovic—who spent much of his career parodying specific songs as well as entire genres of music—would be something of an absurdist and entertaining farce. With roots in a 2010 fake trailer for Funny Or Die that writer-director Eric Appel (who was behind the original sketch) and Yankovic reverse-engineered into a feature-length film, WEIRD: The Al Yankovic Story includes just about every single music biopic trope and cliché in the book.

A movie that kicks off in medias res before a grizzled narrator (who’s literally listed as “Grizzled Narrator” in the credits) brings us back to the beginning? Check. Unsupportive parents? Check. A random eureka moment leading to his first hit? Numerous cameos from fellow contemporaries? Check. A career nearly derailed by drugs, alcohol, and a girlfriend others believe is bad news? Check. A rousing and reflective speech at an award show? Check. There’s even a wrap-up end-credits song written and performed by Yankovic that, he sings, is “technically eligible for Oscar consideration.” (Ironically, Roku is rendering that point moot with its plans to submit the film for Emmy consideration instead.)

WEIRD’s satirical bent on the music biopic isn’t exactly covering new territory here; Walk Hard: The Dewey Cox Story skewered the music biopic subgenre so thoroughly 15 years ago that it’s hard to watch many of the music biopics that came after it—including several Oscar winners—fall into the same traps. WEIRD, at times, struggles to sustain itself and can’t entirely escape Walk Hard’s shadow. But it’s also hard to deny its charm with a fully committed Daniel Radcliffe performance.

Radcliffe, whose post-Harry Potter career has been full of fascinating (and often intriguing) choices, knows precisely what kind of movie he’s in. He, along with the rest of the cast, plays Weird completely straight, wringing every bit of drama out of a script overstuffed with jokes. Whether he’s showing off his platinum albums (all five of them) around his neck to Oprah Winfrey (Quinta Brunson) in a closet full of Hawaiian shirts, setting off on a whirlwind romance with Madonna (Evan Rachel Wood) at the expense of his band, or upset about the possibility that an original song he wrote will be thought of as the parody, Al Yankovic is determined to experience every possible cliché with as much feeling as possible.

“What kind of sick freak changes the words to someone else’s song?” Al bemoans without a hint of irony or realization that after fucking around, he found out; it’s a glorious line reading.

There are some nuggets of truth embedded in WEIRD. Al Yankovic’s parents are indeed named Nick (Halt and Catch Fire’s Toby Huss) and Mary (Mare of Easttown’s Julianne Nicholson), he got his first accordion from a door-to-door salesman, and radio DJ Dr. Demento (Rainn Wilson) played his first song on the radio. The script isn’t concerned with the truth or even an embellished version of it, but for Weird, that’s a feature, not a bug.

It doesn’t matter, as WEIRD takes us through a childhood fraught with a father who doesn’t support Al’s love of accordions to the music industry who doubts his skills, that it’s not true. (One of the record label execs who admonishes, then later signs, Al is played by Yankovic himself, who gets to throw plenty of meta-fueled barbs at his movie counterpart.) Or when, just as the music biopic starts losing steam, WEIRD changes genres, offering new levels of absurdity to behold. The film barely lets one joke land before throwing another zinger to the wall, and while it can be overwhelming, it also offers one of the more enjoyable music biopic viewing experiences I’ve had in a while.

With the real Yankovic providing vocals and playing the accordion, it includes performances of several songs fans will instantly recognize along with a plethora of cameos (both by fellow artists and the actors playing them) to flesh out the world. It’s a spectacle in itself, one that never tries to hide what it’s doing. Radcliffe embodies all of those absurdities with aplomb, and the film wouldn’t work nearly half as well if he were any less committed to playing each and every joke to its natural conclusion.

Perhaps one day we might get a true-to-life “Weird Al” biopic gracing our screens. But it’s hard to imagine it pulling off the meta-feat like the fake one we have right now. What a gift.

WEIRD: The Al Yankovic Story will debut on the Roku Channel on Nov. 4.