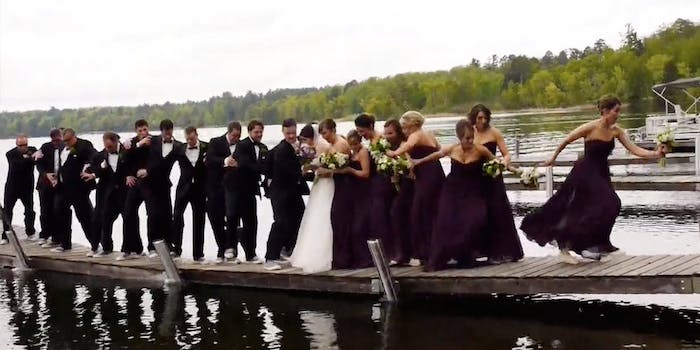 This wedding party photoshoot could not have gone worse

This might be the best 10 seconds of your day.

The British government may be operating secret spy bases in the Middle East, Russia might be hiring secret multi-million-dollar troll armies to astroturf the Internet, and the U.S. government just happens to be pumping billions of dollars in military aid into Europe. But here’s the story you actually want to hear: An unfortunate wedding party has been caught on camera falling into a lake.

Newlyweds Dan and Jackie Anderson—along with 20 bridesmaids and groomsmen—were crowded onto a rickety old pier for a photoshoot when it all went terribly wrong. In a 10-second video, we can see the pier collapse and break, as almost the entire party is submerged up to their waists in the lake.

Someone uploaded the video to Vimeo for posterity, thereby ensuring the calamity will be forever recorded in the annals of history—and available for our own selfish amusement. So give it a watch, have a chuckle, and forget about everything else wrong in the world for a minute or two. You’ll feel all the better for it.