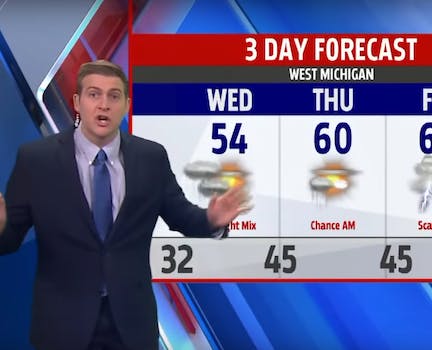 Weatherman is sick of people complaining about the cold weather

It’s almost mid-April and everyone is done with the cold weather. Although we are nearly a month into Spring, parts of Western Michigan will still have below freezing temperatures this weekend.

Meteorologist Garry Frank would like to let everyone to know it’s not his fault.

The weatherman had a bit of an on-air freak-out this week when had to deliver the forecast. He wanted to let his co-workers know in no uncertain terms that he was done with their complaining.

“You guys are dragging me down!” Franks informed the rest of the WXMI crew “Every time I get done with the seven day [forecast] you guys are like ‘Ahhhh! Gosh!'”

The frustrated weatherman continues to argue with someone off-screen, at one point exclaiming “Well what do you want me to do? Lie to you? I’ll put 70 every day next time!”

Later he points out the temperature will get up to 60 degrees Fahrenheit one day. “I don’t know if that’s good enough for you guys,” he adds.

The rant goes on for the entire forecast and ends with Frank walking off camera with a final grunt.

A few seconds later, reporter Robb Westaby enters the screen to give the traffic report. “Is he done?” asked a frightened Westaby, “That was terrifying.”