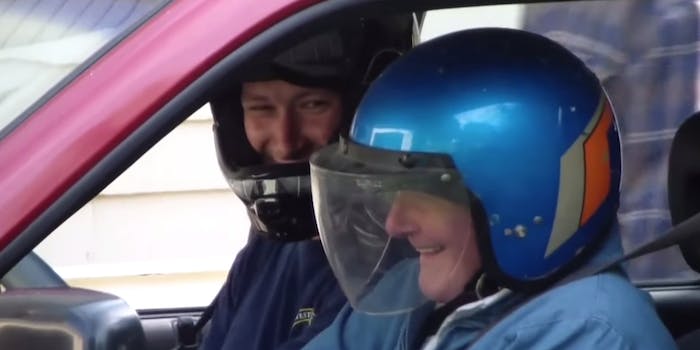 He probably never thought he'd be able to do this.

Walter Thomas is fulfilling a lifelong dream that pretty much anyone else would call a nightmare.

But for a long time, one item remained on his bucket list: he wanted to crash a car through his garage door. On purpose.

“[My grandfather] told me a long time ago that he always wanted to back a car through the garage door,” Becky Goers, Thomas’s granddaughter, told the Woodstock Independent. “He always wondered if the garage door would pop off, or if the frame would come down with it.”

With some help from his family—including a grandson who is a deputy for the McHenry County Sheriff’s Office—Thomas’ dream came true. He got into a car that was on its way to the junkyard and parked inside a garage that was about to be demolished anyway. He was even given some protective gear.

Is this video bizarre—even absurd? Definitely. But if you’re planning to replace your garage anyway, this is one easy way to get rid of the old one.

And Thomas’ face says it all: it was totally worth it.