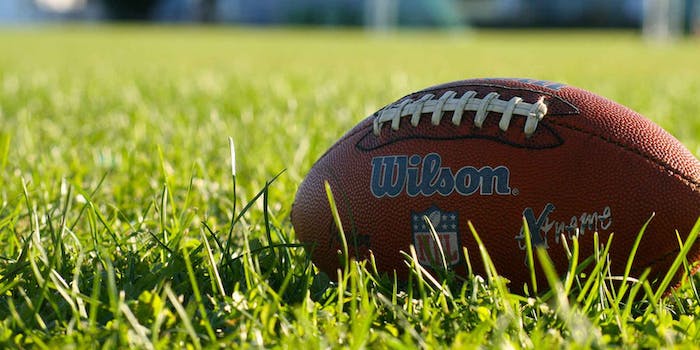 In football, the center has a simple yet extremely important job: Get the ball into the hands of the quarterback with as little vomit on it as possible.

In the fourth quarter of Friday’s Pac-12 championship game, which saw University of Oregon trample University of Arizona 51-13, Arizona center Carter Woods set up at the line of scrimmage, looked down at the ball, threw up all over it, and then hiked the disgusting thing to quarterback Jerrard Randall.

As Vice notes, after the snap, Randall tried throwing the ball to receiver Cayleb Jones, who fumbled the catch—possibly because the pigskin was coated in puke.

To Arizona’s credit, not only did both the center and the quarterback play through the puke as if nothing out of the ordinary had happened, but Woods somehow managed to throw up while not going offsides or getting called for a false start. Seriously, try standing perfectly still the next time you’re blowing chunks, especially on national TV. It seems like it would be pretty difficult.

The professionalism with which Arizona handled the puke may have been the single most impressive part of the Wildcats’ performance that night, which at one point saw the team with less offensive yardage than the Ducks had points on the board.

Maybe throwing up on the field is something of an Arizona tradition. Former Arizona QB Matt Scott has a history of throwing up during games—often after receiving concussions (because football). Playing in an NFL preseason game earlier this year with the Cincinnati Bengals, Scott vomited twice on the field and then almost immediately hurled a touchdown.

Photo by Footballz/Deviant Art (CC BY 3.0)