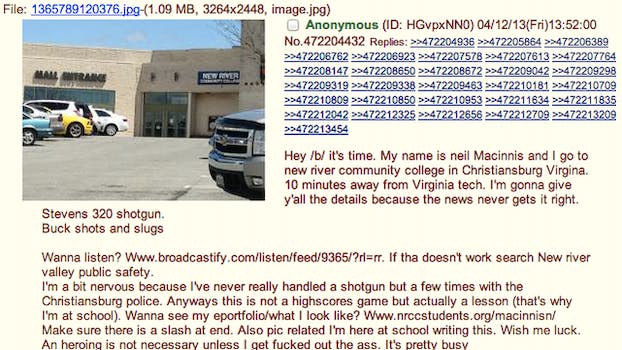 The Virginia mall shooting was announced in advance on 4chan

An unidentified man reportedly posted to 4chan's /b/ minutes before opening fire in a Virginia mall Friday afternoon. 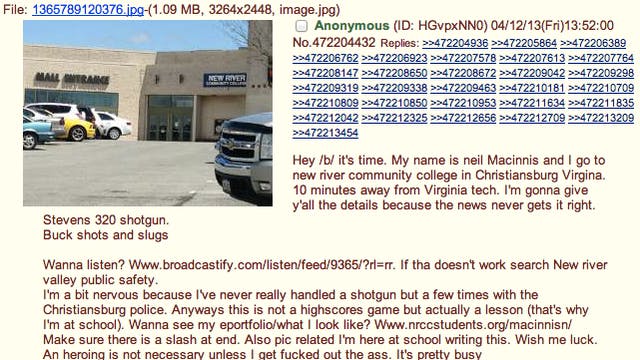 Minutes before an unidentified gunman opened fire at a Virginia mall on Friday afternoon, a user of the 4chan message boards seemingly announced his plans to undertake a mass shooting, providing exact details of the location and timing of the coming spree.

“Hey /b/ it’s time,” he wrote at 1:52 p.m., addressing the anarchic and gleefully amoral /b/ subboard. (4chan has a high rate of turnover, and the thread has since been deleted, most likely automatically; we were provided with an archive and screenshots.)

My name is neil Macinnis and I go to new river community college in Christiansburg Virgina. 10 minutes away from Virginia tech. I’m gonna give y’all the details because the news never gets it right.

I’m a bit nervous because I’ve never really handled a shotgun but a few times with the Christiansburg police. Anyways this is not a highscores game but actually a lesson (that’s why I’m at school). Wanna see my eportfolio/what I look like? Www.nrccstudents.org/macinnisn/ Make sure there is a slash at end. Also pic related I’m here at school writing this. Wish me luck. An heroing [suicide — Ed.] is not necessary unless I get fucked out the ass. It’s pretty busy

New River Community College has a satellite location in the New River Valley Mall. Around three minutes after the posting, Christianburg police received a 911 call that someone with a gun was at the college site with a gun. The shooter managed to injure two women—both now in the hospital—before being taken into custody. Police have indicated that they believe the shooter, who has not been publicly identified, was acting alone.

We have reached out to Christiansburg Police, and the contact information on Neil MacInnis’ website, and will update when we hear back.

Note: The Daily Dot could not independently verify the post through 4chan or Google results.

By Max Read | Screengrab via Gawker