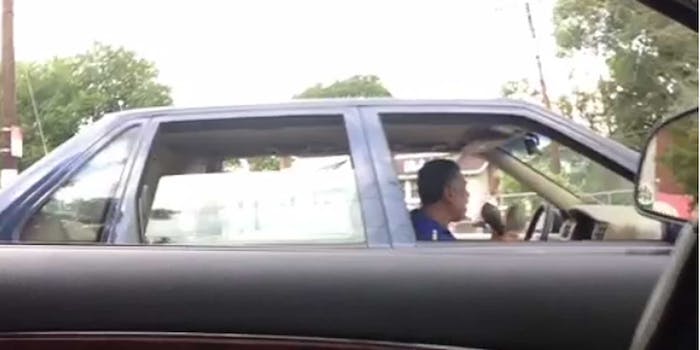 Your driver’s-seat solos have nothing on this guy’s

This guy has two things most traffic soloists don't: props and absolutely no shame.

Singing along to the radio in one’s own car is not an uncommon occurrence, especially while at a traffic stop. One Hispanic man, however, has taken this to a whole new level and thankfully someone was there to Vine the glorious occasion.

Four days ago, Vine user YoungGod posted a short clip of the unsuspected entertainer enjoying the confines of his vehicle.

“So This Is What Happens When Mexicans Are Alone In A Car? #MexicanTurnUp #Dancing #Shakers #Vining #Funny #Comedy #Hilarious #CarDancing HA,” the accompanying description read.

Nothing seemed to be out of the ordinary until the end, when the props came out.

The short clip has been shared almost 3,000 times on Twitter since it was first published. It has also jumped to the top of r/videos—the Reddit clearinghouse for the best Internet videos—where it has received more than 2,000 karma points.

The Vine video also elicited hundreds of comments, many of them correctly pointing out that the mysterious musical man was probably not Mexican. Because he’s listening to Bachata—specifically to Antony Santos’ classic “Florecita Blanca”—chances are he’s of Dominican descent.

Still, others took it upon themselves to give props to the maraca-wielding driver.

“The man’s on point with those maracas,” noted Intoxicologist.  “I’m letting this sh*t loop.”

You’ll want to do the same, too. We’ve been watching this Vine for the last half hour.