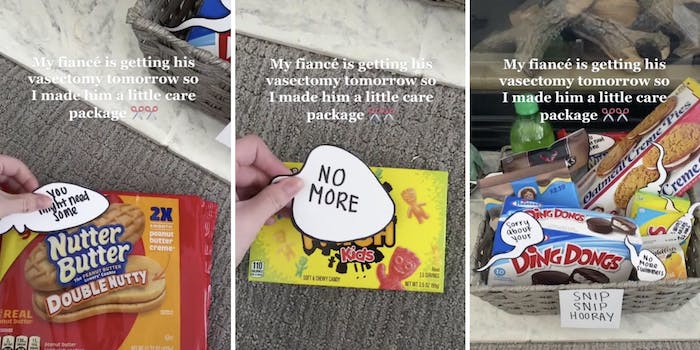 Hilarious or cringey? Maybe both!

Most people definitely wouldn’t want their vasectomy experience to go viral online. However, this couple’s vasectomy story is all over TikTok for surprisingly cute reasons.

TikToker hippiekay21 racked up an eye-popping 33 million views in the past week, after sharing a video of herself putting together a “vasectomy care package” for her fiancé. The package is either hilarious or kind of cringey, depending on your tolerance for puns.

Hippiekay21 filmed herself assembling a basket full of snack food like Swedish Fish and donuts… all accompanied with sperm-shaped notes with vasectomy puns like “[Sorry about your] Ding Dongs” or “No more swimmers” on a packet of goldfish crackers. The label on the basket? “Snip snip hooray.”

The video immediately took off on TikTok, inspiring comments like “Creative asf love it” and “I LOST IT AT NONUTS.” (Yes, the donuts were labeled “nonuts.” This wasn’t a time for subtle humor.) People were also keen to see the fiancé, so it’s just as well that @hippiekay21 posted two follow-up videos.

Posting from the car during her fiancé’s vasectomy appointment, she expressed surprise at the popularity of her first video, and struck back at commenters who accused her of “forcing” him to get a vasectomy.

“It was his idea, not mine,” she said. “He made his appointment.” It seems like there was also some drama over the originality of her care package, with some people accusing her of stealing the idea from elsewhere. She explained that she found the idea on Pinterest, pointing out that there were several similar TikToks from other people as well. It’s not exactly plagiarism when you’re just following a trend that people are demonstrating on social media.

Then in a second update, she shared her fiancé’s reaction. He clearly found the puns pretty funny!

Is the idea of a vasectomy care package kind of weird? Sure, it’s not for everyone! But the original TikTok is just a sweet, funny gesture, and any backlash is an unfortunate symptom of going unexpectedly viral online.

The Daily Dot has reached out to hippiekay21 via TikTok comment.