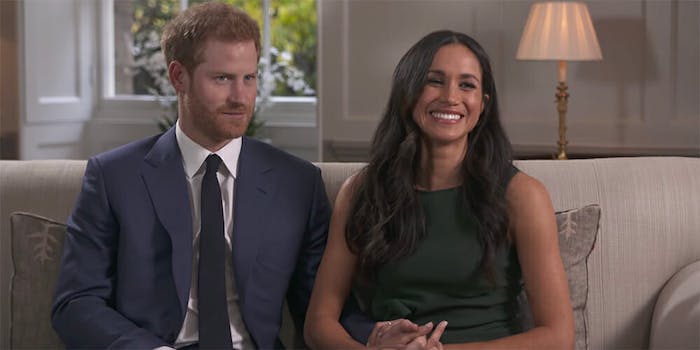 The name will reportedly unite the U.K. and the U.S.

Meghan Markle and Prince Harry’s royal baby arrived on Monday. The Duke and Duchess of Sussex have yet to give their son a name yet, but a royal expert has weighed in and stated the name would most likely be “unusual.”

Since Meghan and the baby are the closest America is going to come to having its very own royals, the expert said the name will also unite the U.S. and the U.K.

“I think there are a lot of names here that work with the British royal family tree but also have strong roots here in the U.S.,” royal expert Victoria Arbiter told CBS.

So an unusual name that will also unite the U.S. and the U.K.? Of course, this caught the internet’s attention–leading people to try and guess what the name will be.

One Twitter user thinks the baby is going to be named after 21 Savage–a name that would definitely unite the two countries. The internet found out the U.S. rapper is actually British in 2018.

Other guesses range from Simon Cowell to Usuk.

They did this already, it was called colonialism. https://t.co/UHiAjESNZu

Well I'll admit Hamilton Targaryen Windsor does have a ring to it. https://t.co/NflrB1DtlQ

He's definitely going to be the only Impeach Brexit Mountbatten-Windsor in his pre-K class. #OneOfAKind https://t.co/GlzBprKFHC

The royals announced the birth of their child on Instagram Monday.

We are pleased to announce that Their Royal Highnesses The Duke and Duchess of Sussex welcomed their firstborn child in the early morning on May 6th, 2019. Their Royal Highnesses’ son weighs 7lbs. 3oz. The Duchess and baby are both healthy and well, and the couple thank members of the public for their shared excitement and support during this very special time in their lives. More details will be shared in the forthcoming days.

Prince Harry said in a video posted to Instagram that they have not yet chosen a name for their child.

“We are very excited to announce that Meghan and myself had a baby boy early this morning… it’s been the most amazing experience I could ever possibly imagine,” Prince Harry said. “We’re still thinking about names. The baby’s a little bit of energy, so we’ve had a little bit of time to think about it.”

This afternoon, His Royal Highness The Duke of Sussex shared the news of the arrival of his and the Duchess’ first born child. Their son was born early morning on the 6th of May, 2019 and weighs 7lbs and 3oz. Their Royal Highnesses thank you for your support and kindness during this exceptionally joyful time in their lives as they welcome their baby boy.