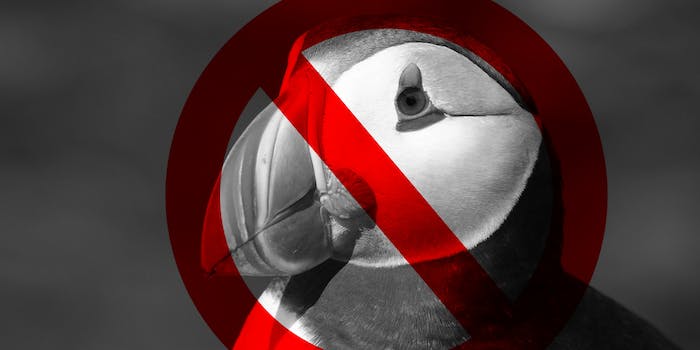 This is why we can't have cute, unpopular things.

The meme, which lfeatures “a photograph of a baby puffin and various captions conveying opinions that are thought to be unpopular,” as Know Your Meme describes it, was banned from the subreddit r/adviceanimals Sunday evening in an announcement from moderator coloicito.

“The mods have been discussing this internally for quite some time, and have finally come to a general consensus that the meme should be banned from the sub,” coloicito wrote. “If you see any posted after this announcement thread, just click on report and we will take care of it.”

The ban comes about 10 months after the first puffin was posted on Reddit as an alternative to the Confession Bear.

Coloicito wouldn’t elaborate as to why the puffin was banned. Hundreds of r/adviceanimals subscribers believe it was because of widespread misuse and abuse. “Too little, too fucking late,” Justvotingupordown commented. “The puffin isn’t the disease, it’s just a symptom. [Adviceanimals] is an intellectual wasteland which serves no purpose. And I am not just saying that because the mods shadow-banned me and refuse to explain why.”

On May 7, r/adviceanimals was removed from Reddit’s default subreddit list while 26 others got promoted. This list of defaults populate Reddit’s front page and often drive heavy traffic to popular links submitted to them.

The demotion marked a significant change in Internet meme culture, as Google Trends has shown how image macros like the unpopular opinion puffin are nosediving in popularity.

R/adviceanimals moderators banned the Dad Joke Dog meme and the Pun Dog on May 19. Moderators did not elaborate on this ban, resulting in a handful of angered r/adiceanimals loyalists.

Photo by marcobellucci/Flickr (CC BY 2.0) |  Remix by Fernando Alfonso III