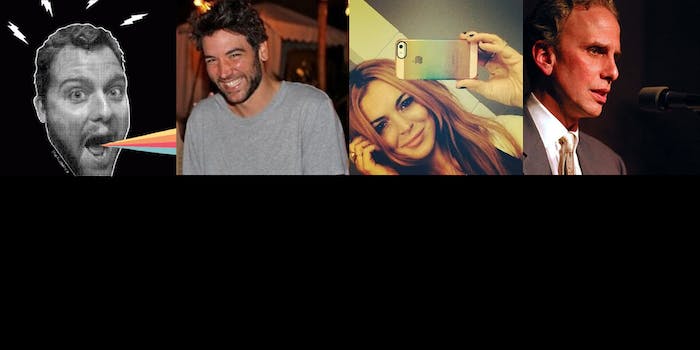 This week Nimrod Kamer encourages you to follow some of Arianna Huffington's friends after he saw a particularly nauseating tweet.

I was hugely upset this week by a nauseating tweet sent by Arianna Huffington, which was a photo of herself and a bunch of close personal friends sitting in her living room, procrasturbating and dressed really ugly. I couldn’t help it but to unfollow each and every one of them. Soz.

I adore Lindsay but can’t stand the fact that she decided to spend a night at Arianna’s sofa, inside that alleged $27,000-a-Month ‘Bloodied Mattresses’ apartment. I don’t even want to know what she’s promoting there. A while back, during happier times, I took a selfie with Lindsay at the Dorchester Hotel, London, as you can see below, but now I actually find her 21.6 K followers mum, Dina, more attractive.

Forrest Gump’s bench ! “Life’s like a box of chocolates ,ya never know what your gonna get ” xo @OWNTV pic.twitter.com/aRmGEdkBxj

Unfollow this characterless actor for tweeting things like ‘Song of the day’ everyday. The last one was a YouTube video by Israeli a-political Apple advertisements performer Yael Naim, called Paris. I refuse to even embed the embedment of this. Then he tweeted an awful happy birthday message to 90s actress Alyson Hannigan with an excessive amount of exclamation marks as if he really cares about her. Everyone should be infuriated by the dauntlessness of this amateur.

Unfollow this creepster who calls himself ‘meditation bob’ on Twitter and is the Executive Director of the David Lynch Foundation. His tweets sound like dictations from a clinically opressed robot. There’s no such thing as Transcendental Meditation, but Roth keeps banging on about it every two posts. I’m sure David Lynch denounces this flat tire completely and will deny knowing him nor letting him run his foundation, whenever asked.

Please unfollow Oliver Luckett of theAudience, someone who thinks he knows how toBuild online fan bases. As if. His eight-thousand-followed personal fan base is made up of many fake bots and low key personnel at BuzzFeed. It’s obvious why he’d suck up to Huffington and enjoy her pad. He’s one of these people who’ll describe any two people in a photo he took as ‘2 of my favorite people’. He’ll also announce on Twitter that he’s landed in Miami just because there’s reception suddenly. 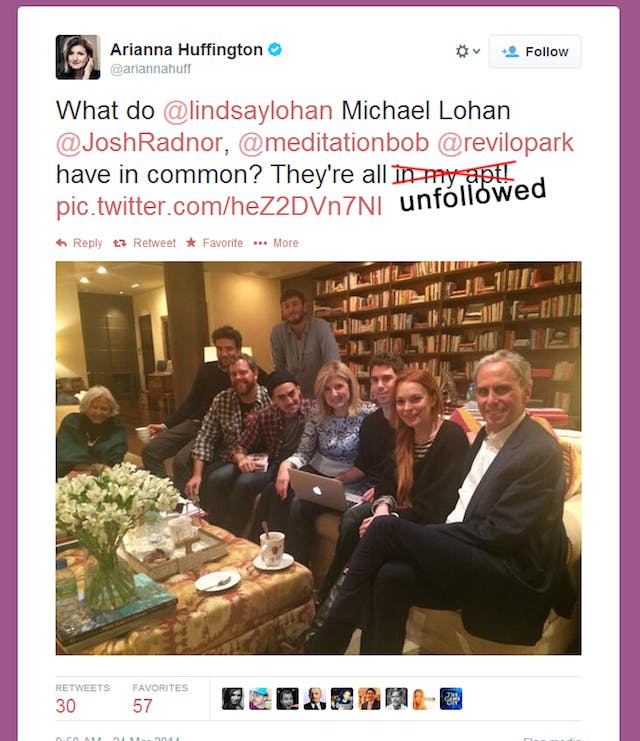