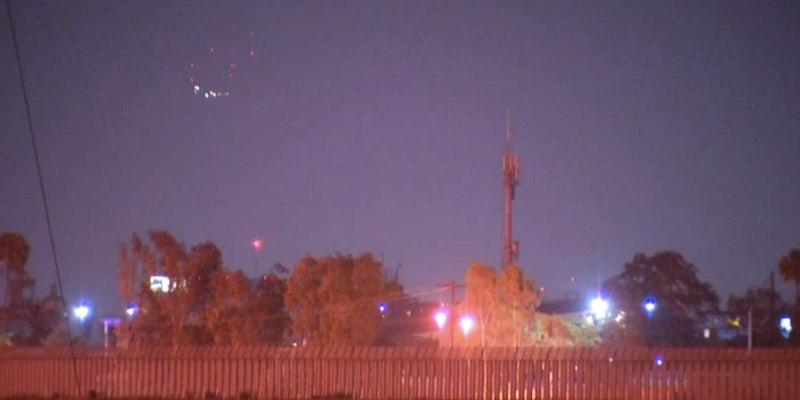 Aliens flew over San Diego, and we’d like to introduce ourselves

Multiple eyewitnesses from San Diego all the way down to San Ysidro reported mysterious lights hovering in the sky Tuesday night.

The cluster of lights was apparently stationary, leading one spectator to believe that what he was seeing wasn’t a plane, drone, or weather balloon.

“It was a series of flashing lights,” Jared Fox, the eyewitness, told NBC 7. “If it was a plane, it would have moved.” An NBC 7 photographer also captured the UFO in the video GIF’d above.

Because I don’t cut corners, I needed to investigate further. So I looked to the place any self-respecting reporter would find the truth: the comments.

Right off the bat, commenters were telling it like it is: “I’m not saying it’s aliens. But it’s aliens,” one Earth citizen remarked. Others, in the mood for debate, presented their theories.

Point: “A string of LEDS tied to balloons….”

Not one for jokes, I can’t say I was convinced by that last point. I always thought of Southern California as a taco region. The Bay Area is where you get the burritos. That’s certainly what I’d tell our visitors once they land and are in the mood for a good meal.

Seeing the video for myself, I don’t think that’s a UFO at all. UFO implies the flying object is unidentified, but I know exactly what that is. It’s the Mothership, and Earth doesn’t belong to humans anymore.

Let me be the first to bite down on a cigar and say: “Welcome to Earth.” No sucker-punches, no funny business. I mean it. Welcome!

We’ve got some nice things here. Not really sure how it measures up to where you’re from, Supreme Beings. I’ve never left the planet. But what I lack in knowledge, I can certainly make up for it in knowledge of San Francisco’s best burrito spots, and all the top burger joints in Austin.

Oh, you’re so advanced you feed off of pure energy from the sun? Well. I’m sure with all that advanced technology, you’d do gangbusters in the tech industry. I’m sure our smartphones are pathetic to you, but we can do lots of cool things with them, like get a date, or a ride, or have someone bring your groceries right to your door. Oh, right, you don’t need groceries. Well, how do you say, “Yo,” to your bro? Right, with your giant throbbing brains?

What is it you want? You took a wrong turn? You’re heading to an Intergalactic Space Party? Can I come?

No, no. That’s okay. I understand. I should probably take care of some errands before weekend, anyway.

But before you go, Supreme Beings, take a look at this cute puppy.

Editor’s Note: Upon viewing the puppy playing air drums, the Supreme Beings invited the author to the Intergalactic Space Party. He evidently accepted. We found this document on his hard drive, along with a dossier of animal videos labeled: “For when they arrive.”