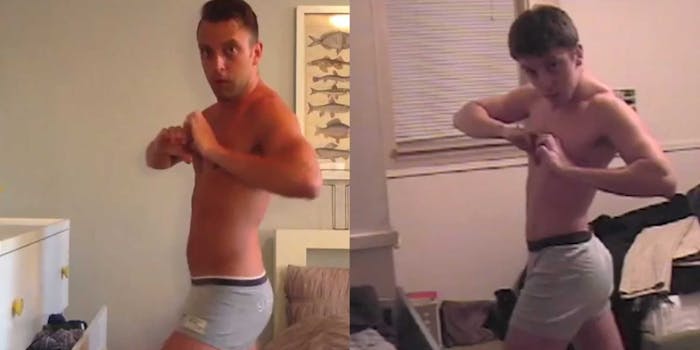 Move over, Tom Cruise. Your jam in Risky Business has nothing on Tyler Marcum.

Move over, Tom Cruise. Your jam in Risky Business has nothing on Tyler Marcum.

When Marcum, a sales planner based in New York City, was 20, he decided to make a video of himself performing an interpretive dance to the Dixie Chicks’ cover of “Landslide” in nothing but his underwear.

He uses the song’s lyrics to determine the dance moves, and for the most part he uses the literal translation; for example, going down on “down” and holding up two fingers for “too.”

Marcum has aged since then, but as he turns 30, he’s looking back. Instead of getting a cake, he decided to end the 20s the same way he started them.

“I turn 30 in a week and couldn’t think of a better homage to my 20s than a sensible mashup,” he wrote in the video description.

A lot has changed in 10 years. He tried to nail down the details of the original video. He couldn’t shoot it in his college dorm, but he still had the messy bed and an open drawer in the background. He’s pulling the same cheesy moves that will make you laugh and groan at the same time with even more enthusiasm than he did at age 20.

And of course he’s still dancing around in just his underwear, although it’s definitely not the same pair.

YouTube wasn’t around when Marcum filmed the original video, but it’s also not the first time he’s strutted in front of a camera. A December 2007 shows him strutting his stuff to Beyoncé’s “Lost Yo Mind,” and his dance moves have improved since he filmed “Landslide” in 2003.

We’ll be expecting another reenactment at age 40.