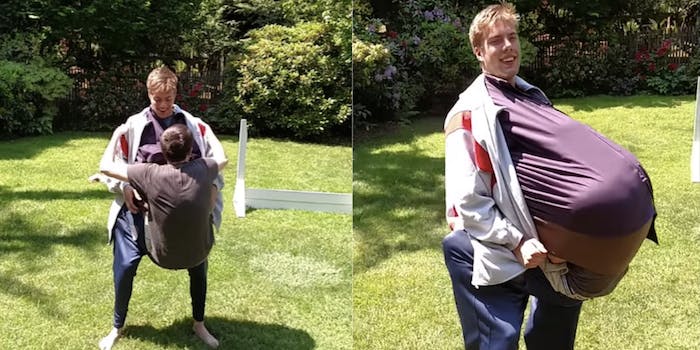 Two friends sneak into the movies disguised as one person

Turns out that old two-kids-stacked-on-each-other-in-a-trenchcoat trick has legs.

Yes, you can actually pull off the Vincent Adultman in the real, non-cartoon world, and two buddies just proved it. Well, with some minor tweaking. The key is to think bigger—and wider.

Armed with some very large clothing and a dream, Bo Johnson and his friend Matthew practiced diligently before pulling off an epic heist: Enter a movie theater as one large man with a single ticket purchase, leave as two accomplished friends.

Of course, it might not be advisable to try this stunt at home. Unless you’re equipped with excellent core strength and live near a movie theater with employees who will think nothing of an obese looking man with oddly slim legs. Basically, go big or stay home.