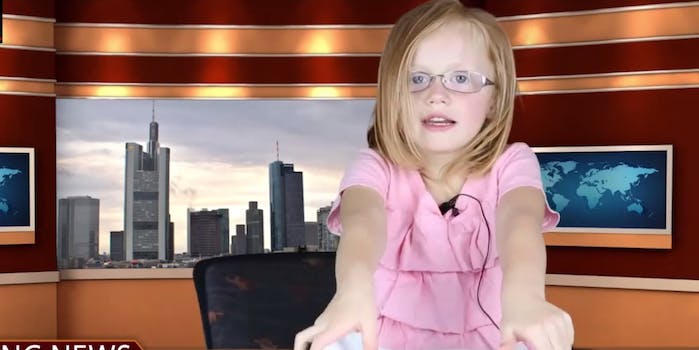 They're totally ready for a career in cable news.

Every professional broadcaster—from Anderson Cooper to rapping weatherman Tom Murphy—had to start somewhere. Somewhere in Utah, two adorable future journalists are giving YouTube and Reddit a look at the future.

Redditor mynickname86 shared a video of his nieces Libby and Sarah hosting their own newscast, complete with an anchor desk, scripts, and even graphics. Oh, and a very apparent disdain for Canada.

“There’s going to be a tornado and a blizzard…so you have to be out of Canada, not even in an area near Canada…do not leave anything behind, because you might die…you need to bring your fridge,” Libby reports.

“Tornadoes erupt in Canada, and Canada only, so never move to Canada,” Sarah adds, as part of her weather forecast.

Their uncle insists that, despite the decidedly anti-Canadian slant, there was no prompting whatsoever.

Ladies, you already have the fear-mongering down pat—you’re well on your way to careers in cable news.

They already have fans.

“The funniest part is that this news report is more informative than the real news on TV” redditor bopoqod said.

“This may be the best video i’ve seen on the internet. Hilarious!!! You should definitely encourage these girls’ creativity, seems like they’ve got a lot of potential for comedy in the future…” redditor antbones111 said.

With these kinds of ratings, let’s hope that they continue to report on the latest developments both inside and outside of Utah. Until then, stay out of Canada.