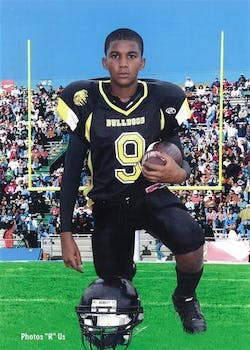 The Twitter account has gained 40,000 followers with promises to make donations to Trayvon Martin Foundation—except that organization doesn't exist.

In the wake of massive online outcry over 17-year-old Trayvon Martin’s murder by a neighborhood watch captain, tens of thousands of Twitter users are following a mysterious new account devoted to remembering him.

@WeLoveTrayvon has only tweeted 12 times and only once since Friday. The account follows no one, and its author gives no indication to who’s behind it. Nevertheless, @WeLoveTrayvon has gained more than 40,000 followers, and according to statistics from Topsy, it’s been retweeted and mentioned over 16,000 times.

The account’s first tweets were direct and simply asked to be retweeted.

“A lady who threw flour on Kim K. was arrested on site, but the man who killed Trayvon Martin is still free. RETWEET if you’re against that,” the account posted next.

It quickly moved on to dubious promises.

“R.I.P. Trayvon Martin. For every RE-TWEET this tweet gets, $1 will be donated to the Trayvon Martin Foundation, which helps counteract racism,” it posted. A Google search reveals no such organization.

“R.I.P. Trayvon Martin. Every RE-TWEET this tweet gets, counts as a petition signature for the Supreme Court to recognize his case,” the account tweeted 40 minutes later.

Though Martin’s father has started an online petition—and it’s phenomenally successful, having gathered over 2 million signatures—its goal is to draw the attention of the Florida Attorney General to prosecute Martin’s shooter, not to show the Supreme Court a number of retweets.

The U.S. Department of Justice has since opened an investigation of the case.

Celebrities like Gucci Mane and Diddy have retweeted @WeLoveTrayvon, fueling its popularity. The account has yet to respond to any other users—not its fans, not its critics, or to the Daily Dot’s requests for comment.

“How can a dollar counteract racism?” asked @LYED in a typically unanswered tweet.

“how is a retweet ever going to count as an offical signature, u just want retweets, JACKASS,” wrote @priincerichard.