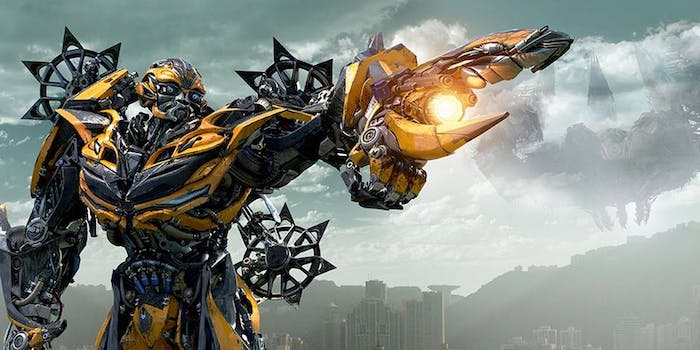 The new ‘Transformers’ movie will make a billion dollars, even if the Internet hates it

The world of 'Transformers' is flat.

Every few years, two concurrent events as perennial as the rising and descent of the sun grace America: a new Transformers movie and a lot of grousing about how the increasingly terrible franchise is still making money hand over fist.

This isn’t an invalid instinct, necessarily; the films exemplify everything that skeptical audiences view as being wrong with American summer tentpole movies in the new millennium. They’re loud, hyper-stylized, overlong, and more than a little vapid, oftentimes substituting platitudes and gratuitous shots of American flags for traditional cinematic storytelling. But hey, people are seeing them.

A lot of people, actually. Last weekend, Transformers: Age of Extinction became the first film of 2014 to cross the $100 million marker in the U.S. on its opening weekend alone. Transformers’ social media activity has been off the charts accordingly, with just under 125,000 tweets regarding it this week alone. (The only films to outpace it at present are 22 Jump Street and The Fault in Our Stars, both of which appeal directly to a social media-savvy teen audience.)

For all the derision lobbied at Age of Extinction from critics and audiences weary of a retread-heavy series, it’s out-and-out foolish to think that people don’t still care. What constitutes a more interesting question is why they still do.

Age of Extinction currently has a 59 percent approval rate on Flixster. For a service that offers a reasonable amalgam of audience opinion, that’s not a great percentage, especially when you take into consideration that the film actually dropped below 60 percent in the week since its release. This means that word of mouth is rapidly depreciating with time. (Its A- Cinemascore suggests, if anything, that people who would see a fourth Transformers immediately upon its opening got what they were expecting, at least.)

For contrast, this summer’s much-maligned The Amazing Spider-Man 2 still has a 71 percent on Flixster, whereas more acclaimed offerings like Godzilla and X-Men: Days of Future Past pulled a 71 percent and 93 percent, respectively. Of year’s biggest releases, Transformers seems to be among the least popular to date.

But Age of Extinction isn’t necessarily concerned, as a film, with whether it’s popular in America alone. It’s a film that was inevitably going to be panned by critics, and has been; its 17 percent fresh rating on Rotten Tomatoes constitutes a new series low, somehow dropping below the 19 percent of Revenge of the Fallen, the second entry in the franchise.

But when discussing a film that reportedly cost $210 million to produce, and some reasonable equivalent thereof in promotion, this is a film that has to make far more money to turn a profit than U.S. audiences can offer alone. Age of Extinction is part of the pantheon of the new blockbuster movie, the globalized enterprise that isn’t for any one audience, but for all audiences.

The film’s final third abruptly absconds to Hong Kong, where a vague plot point about a new, shapeshifting metal called Transformium (yes, seriously) justifies the film’s relocation to destroy a world city, rather than the traditional desecration of a domestic one. Though the film also destroys parts of Chicago while it’s at it, this ending allows the film to appeal to a much broader audience — and a lucrative one at that. Last weekend, Chinese audiences threw down the equivalent of $90 million for Age of Extinction, and now by midweek the film’s grosses there have actually outpaced its domestic takings.

It’s the biggest-ever box office debut in China for a foreign film, but let’s stop for a moment and really consider this. To audiences around the world, Age of Extinction is a foreign film. Where this has long been a standard of quality and ambitious filmmaking in the U.S., the phrase associated with films like Crouching Tiger, Hidden Dragon, our primary cinematic export is a movie about giant fighting robots and a magical metalloid called “Transformium.”

Now, while the global film market is more accessible than ever before, Hollywood’s recent pandering to it has become rather egregious. It’s not just Age of Extinction, either. Consider how in its fifth installment, the Fast & Furious franchise pulled up stakes and relocated to Brazil out of nowhere. Or the Hong Kong sequence in The Dark Knight, which is the most nonsensical portion of the film by a notable margin.

That latter example is key, because oftentimes these attempts made by Hollywood films to appeal to a global audience feel shoehorned or unnecessary, clear examples of some sort of international financing deal for the project that allowed it to exist in exchange for cross-market appeal.

The Associated Press’ Louise Watt recently noted just how far the promotional cycle for Age of Extinction went in appealing to its target audience:

More than half an hour of its action takes place in Hong Kong and the crew filmed in three other Chinese cities. Chinese star Li Bingbing has a fairly major role and boy band singer-turned-actor Han Geng has a one-liner. A reality TV show was held a year before the movie’s debut to choose four people to play roles. In one scene a billboard stretches across most of the screen, advertising a Chinese liquor. In another product placement, Stanley Tucci’s character takes a break on a roof and drinks from a carton of Chinese milk.

These moments would largely be lost on Transformers’ core audience, but increasingly, they’re no longer the point. Americans have proven consistently that they’ll turn out for a grand summer spectacle. The goal now is to get everybody else on board.

The issue with this is twofold. First, this approach to filmmaking as globalized industrial product first and film a distant second not only eschews quality of the actual film as a priority, but continues the trend in recent decades of eradicating the American national cinema in favor of America being the hub of film for the world. Second, and perhaps more importantly, other audiences aren’t completely oblivious to this pandering. Last summer, as part of Iron Man 3’s rollout, Paramount went as far as actually shooting additional footage, exclusively for Chinese audiences.

Kotaku’s Eric Jou illustrates why this didn’t go as planned: “It literally offends me as an American in China and as an ethnically Chinese person that Hollywood would attempt to sell this to the Chinese audience. It undermines Chinese people’s intelligence and movie savvy.”

And there’s the rub. Transformers: Age of Extinction might do everything in its God-given power to appeal to as many people as possible, but a lot of them just aren’t enjoying it, even if they did put money down to sit through it.

And while it may seem like a good idea from a branding standpoint to appeal to many people as possible, there’s a pretty significant gulf between “appealing” and “pandering.” Given that Age of Extinction comes off from start to finish as a film built backwards into a movie from a series of projection charts and PowerPoint slideshows, none of this is particularly shocking, but it’s all for naught if audiences won’t buy what you’re selling.

And while Age of Extinction is making money, it won’t be enough if it doesn’t sell the Hasbro toys (the company is acknowledged as one of the first images onscreen) or the ancillary tie-in products. Not insulting your audience is a good place to start in that regard.

Photo via Transformers: Age of Extinction/Trailer