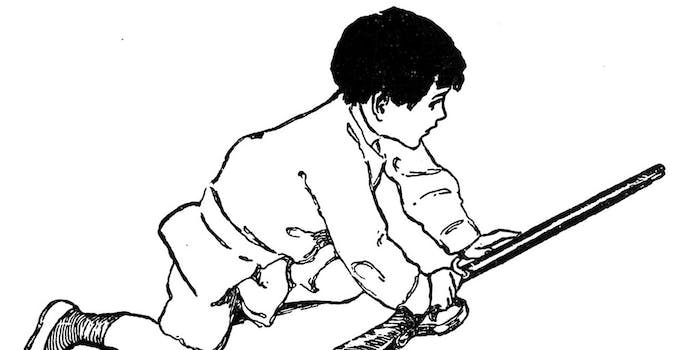 Fact: Your child more is likely to die from a gun accident than from cancer.

Toy guns have come under fire after New York Attorney General Eric Schneiderman forced three major retailers to stop selling realistic-looking fake plastic firearms. While toy guns sold at Amazon, Walmart, and Sears have had the famous orange tip on their barrels since federal law began requiring them in 1989, New York state law requires they also have an orange stripe down the side—and New York City regulation even requires that the toys be completely orange. Despite these policies, Schneiderman said in a statement, “Year after year, we found retailers chose profit over safety.”

The battle over toy guns can help us understand how and why real guns are so difficult to restrict—and so easy to own. The toy industry and retailers, in stark contrast to their counterparts who make and sell firearms, bow to societal pressures in the name of keeping children safe. Toy guns deserve to be regulated because they can and have posed a serious risk to children and police officers. However, the degree to which retailers and manufacturers bend to keep toys safe should be held in stark contrast to the brick wall gun control advocates meet when they fight for the same.

The Schneiderman ruling, which includes a $300,000 collective fine for the companies, is rather surprising when one considers how hard retailers have fought for the right to sell real guns how and when they please. Critics often target Walmart in particular—as it’s the largest gun retailer in the United States. The ubiquitous chain sells a variety of hunting rifles, as well as automatic, high-capacity weaponry like the gun used by James Holmes. While Walmart is willing to accept the regulation of toy guns, they’ve spent untold millions in legal battles to prevent anyone from touching the actual threat to kids.

The danger of toy guns and airsoft rifles is real, and not simply because they desensitize children to the risk of their high-power counterparts (USA Today’s Jonathan Zimmerman accurately compares toy guns to candy cigarettes). While official counts of children or adults being targeted for wielding a toy gun are few and far between—Schneiderman claims New York state has seen 63 children shot by police who thought their toy guns were real since 1994—the stories do begin to pile up.

While Walmart is willing to accept the regulation of toy guns, they’ve spent untold millions in legal battles to prevent anyone from touching the actual threat to kids.

Last February, the LAPD shot a 15-year-old wielding an orange-tipped toy gun. Last November, Tamir Rice was shot and killed after Cleveland police mistook his airsoft rifle for the real deal, and a judge has ruled the officer will face murder charges. Police have also shot a 13-year-old in Santa Rosa, California in 2013 and a 12-year-old in Arkansas in 2007, all because they mistook toy weapons for real ones.

Their stories are chilling not just because of the mistaken happenstance that led to their death—all children playing with their friends in broad daylight shot dead by otherwise good cops—but because of the risks it poses to even the most careful parent.

But while these and many other incidents are serious tragedies, they do not come close to the rate at which children are killed by real guns. According to research compiled by the advocacy group Moms Demand Action for Gun Sense in America, 100 kids die each year in the U.S. from gun accidents—making it the single household item most likely to claim the life of a child. According to the Children’s Defense Fund, the total tally of children killed by guns is larger than the number of troops injured in Afghanistan. Your child more is likely to die from a gun accident than from cancer.

Although many, like the Moms Demand Action group, are fighting to protect children from gun violence, we have yet to do the same as a nation. Attempts to regulate guns in the last few years have become depressingly unproductive. President Barack Obama recently cited the lack of action in Congress on gun laws as his biggest frustration during his presidency.

However, many others have refused to give up. Sen. Chuck Schumer (D-N.Y.) recently brought out his more famous cousin, Amy Schumer, to help push for gun reform after a gunman killed three during a screening of her new film Trainwreck. “These shootings have got to stop,” the actress and comedian said in a speech yesterday. “I don’t know how else to say it. … These are not extreme ideas. No one wants to live in a country where a felon, the mentally ill or other dangerous people can get their hands on a gun with such ease.”

But as writer Dan Hodges wrote on Twitter, the massacre of 20 grade school children and six faculty members at Sandy Hook Elementary School in 2012 “marked the end of the U.S. gun control debate. Once America decided killing children was bearable, it was over.”

The ease with which the toymakers, an $84 billion industry, accept government regulation to ensure the safety of their products stand in stark contrast to the epic tantrums the gun industry has against even the slightest safety measures. As Slate’s Evan DeFillipis and Devin Hughes wrote, teddy bears and Barbie dolls are subjected to numerous regulations and checks, yet their high-powered counterparts “have exactly zero federal safety standards regulating their designs.”

According to the Children’s Defense Fund, the total tally of children killed by guns is larger than the number of troops injured in Afghanistan. Your child more likely to die from a gun accident than from cancer.

The Consumer Product Safety Commission cites scores of standards for the materials used in toys, the electrical wiring of toys, the construction and shape of toys, the dexterity of toys, and how and why toys are tested by third parties. Toy companies are frequent losers in lawsuits over the injury or fatality of a child from one of their products, yet gun retailers and manufacturers manage to slip from the grasp of the many, many families who have attempted to file suit. This is mostly thanks to a 2005 law restricting lawsuits against gun manufacturers—which the NRA forced through a Republican-held Congress.

The careful regulation of toy guns is important—I’d even argue against their sale altogether—but it takes away from highlighting the real risk to children simply a few aisles over. We treat everything our children touch with such legislative care, regulating the toxin level of the paint on a doll (to reduce the risk of cancer) and the visual graphics of a video game (to help prevent seizures). Gun retailers will likely never see the level of regulation toymakers face, a sad mix-up of priorities that endangers our children while making us feel like we’ve made them safer.