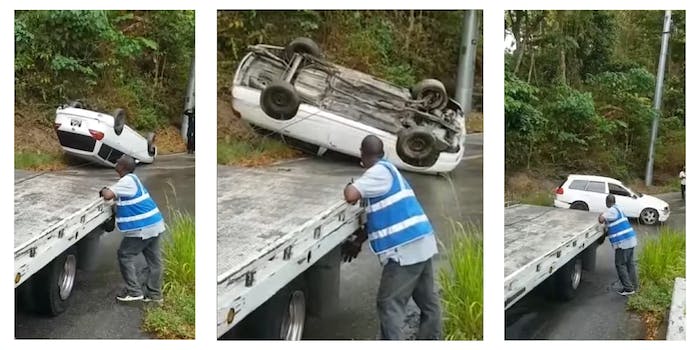 Your first day at your new job can be the worst. You don’t know the office politics. You can’t remember how to get to the restrooms. You don’t know the company’s policy on stealing other people’s lunch from the office fridge. But you’re probably not going to do too much damage to your career, because everybody who knows that you’re a newbie probably will cut you a break if you make a mistake.

Unless you’re a tow truck driver, that is. Because if it’s your first day on the job towing cars, there’s plenty of damage you can do if you screw up. In fact, you can make things much, much worse.

Now, we don’t know for sure if the video below was actually the driver’s first day on the job. That’s just what this video is titled and what we’d like to believe to make the first two paragraphs of this story make sense. But you’d like to think a veteran tow truck driver would have made sure this didn’t happen.

Full props to everybody seen in the video who acted like the truck making an escape like Andy Dufresne from Shawshank was completely normal. If that’s the case, maybe it’s not the tow truck driver’s first day. Maybe he just works for the same company who managed this.