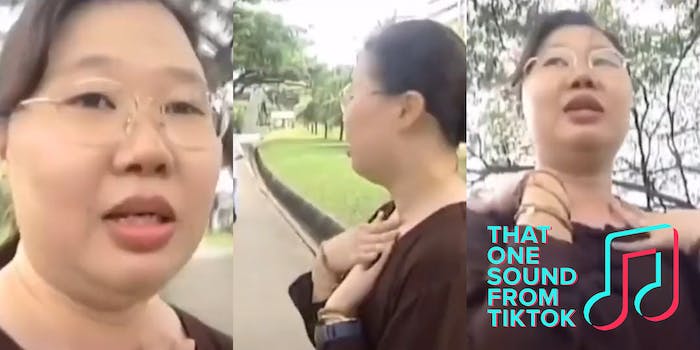 What moments have left you speechless?

There is a lot of stuff that’s left me too stunned to speak this week, and so investigating the origins of this TikTok sound just feels right. Since last year, a snippet of audio from a Singaporean crime show has been the soundtrack for embarrassing and incriminating interactions on TikTok.

In this iteration, the sound starts with a sustained note on an organ, and someone says, “The woman was too stunned to speak.”

A November TikTok from Mediacorp, a popular Singaporean broadcaster, has more than 895,000 views. But the actual sound is from a now-private account, and it’s been used in more than 128,000 TikToks. Typically it’s applied to embarrassing situations. Often, it’s applied to racist remarks.

In November, Miranda Allyn posted a TikTok of her saying “The woman was too stunned to speak” as different influencers. In January, creator Fannita used the phrase in a caption accusing fellow creator Marco Borghi (@poloboy) of racist remarks.

A Starbucks barista made a tweak to the sound last month.

The sound is from a Singaporean show called Crimewatch, which reenacts crimes solved by Singaporean police, and is produced by the National Crime Prevention Council. In a 1998 episode, a woman is walking along when a man wearing sunglasses grabs her necklace off her neck. An ominous organ sound crashes in as she clutches for her jewelry. “The woman was too stunned to speak,” says a voiceover.

There are some very specific editing choices when the robbery happens.

In the full clip, she directs a man on a bike to go after the thieves, but instead, he goes to the police station and stays “calm.” The cops allegedly apprehended the thieves 18 minutes after the robbery, according to the Crimewatch Wikipedia. Another crime on the same 1998 episode regards “a scam regarding the cloning of credit cards and selling them.”

The series still airs, and another sound—this time from a 2013 episode of Crimewatch—went viral in December. In the clip, a rival gang member calls a woman a “prostitute.” The actresses who appear in the episode reacted to the clip on TikTok in December. The identity of the woman who was too stunned to speak has not yet been made public.

“The woman was too stunned to speak” made it to Twitter as well, adopted by stan accounts.