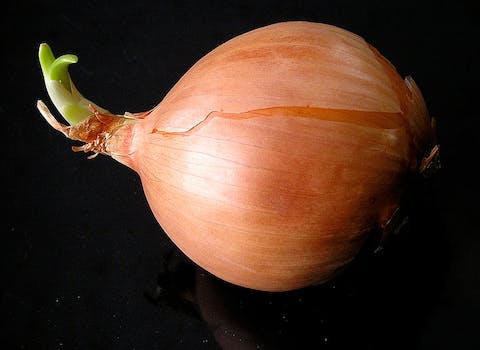 This is as baffling as it is badass.

Tony Abbott, current prime minister of Australia, isn’t what you’d call “popular.” His approval rating keeps falling, the media down under delight in compiling his sorriest gaffes, and just this week, a video address he recorded for St. Patrick’s Day drew fire for its “patronizing” tone.

When you’re so thoroughly disliked by the people you represent, it’s natural to find yourself in an existential funk. Does nothing matter? Is anything real? Should I consume a raw onion whole, skin and all?

No, really: That’s what Abbot did on a visit to Charlton Farm Produce in Tasmania, allegedly without tearing up or indeed visibly regretting the decision in any way. “Better than any other onions I’ve eaten in a long time,” the PM reportedly said, feeling utterly dead within.

Twitter commentators couldn’t believe their eyes, and in no time flat, the hashtag #oniongate had erupted, with many wondering what borderline-inedible objects Abbott might eat next. 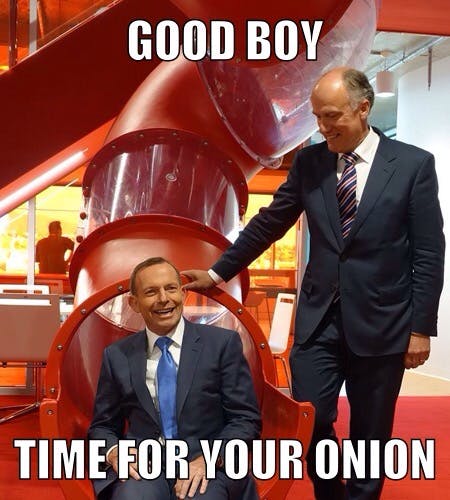 Do you think the other alien reptoid overlords who secretly run the world are angry that Tony Abbott is running their cover? #oniongate

#OnionGate
Just in case you haven't had quite enough onion today… pic.twitter.com/WxtU7f5uC0

Truth be told, we’re pretty impressed with this feat of digestive insanity. Maybe Abbott has a shot at a Guinness World Record?

But not if he goes up against this kid:

In any case, the joke’s on Abbott’s opponents: Onions are rich in fiber, antioxidants, and cancer-fighting compounds, so poor health won’t force him out of office anytime soon. And whenever he’s finally voted out, he can spend his free time doing the charitable work of training onion-eating amateurs. Most of them could really use the help, it seems.