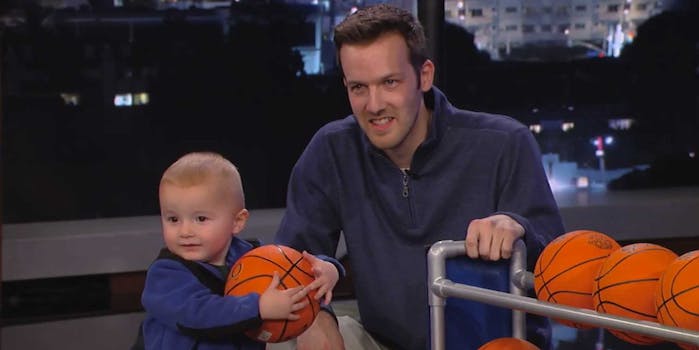 Watch this toddler put Shaq and Kobe to shame

2-year-old Titus Ashby can show up the best of YouTube with his trick shots, but how does he stack up against the best of the NBA?

The Heat and the Spurs are currently duking it out on the court in the NBA Finals, but Jimmy Kimmel managed to grab some of basketball’s biggest stars to test their shooting skills against the toddler version of the Harlem Globetrotters in a segment called “Clash of the Titus.”

Each shooter had 30 seconds to make as many baskets as they could. The size of the net and the distance were determined by the player’s height. Titus’s father, Joseph, handed his son balls while Kimmel assisted (and “adopted”) the basketball player.

For the second round, Titus was pitted against one of basketball’s best current players: Kobe Bryant.

Unlike O’Neal, Bryant put a few points on the board and put the pressure on Titus.

“Do you think you can beat Kobe?” Kimmel asked Titus, who responded with a quiet “Yeah!”

Titus was only able to match Bryant’s score, but the confetti still fell down on the stage and he still received thunderous applause from the audience.

“We have a Tie-tus!” Kimmel shouted.

Even tying Bryant’s score is an accomplishment to most.

You’re up next, LeBron James.