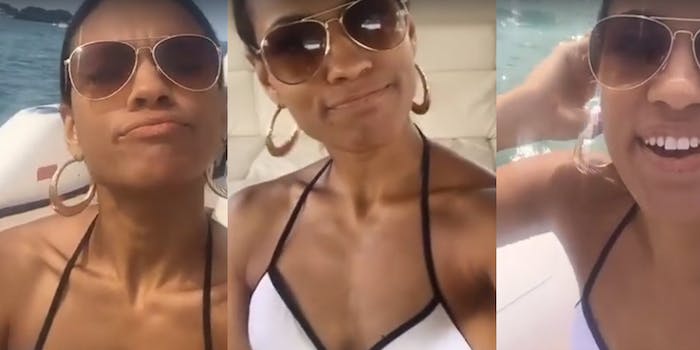 There are bad Tinder dates, and then there are Tinder dates in actual hell—like when you get stuck on a boat cruising around Lake Michigan for five hours with a gaggle of other girls from the dating app.

The Chicago resident originally matched with a guy named Emad six months ago, in March. He’d been flirting with her and asking her on dates for a while, but she always turned him down because she wasn’t quite into the guy. But when Emad invited her onto a boat over Labor Day weekend, Kayla simply couldn’t refuse.

Sounds like a perfect way to celebrate the end of the summer, right? But there was trouble on the horizon.

“When I got there I could tell something was up because he was kind of standoffish, which seemed weird considering he’d been trying to get a date with me for six months and had sent five texts that morning confirming I was going to be there,” Hutch told the Daily Dot. “However, I thought he was just shy so I went on the boat. There were about 20 women and 5 men on the boat, so I ended up talking to some 21-year-olds. I asked how they knew the guys and they said they’d met Emad on Tinder and this was the first time they’d gotten together.” 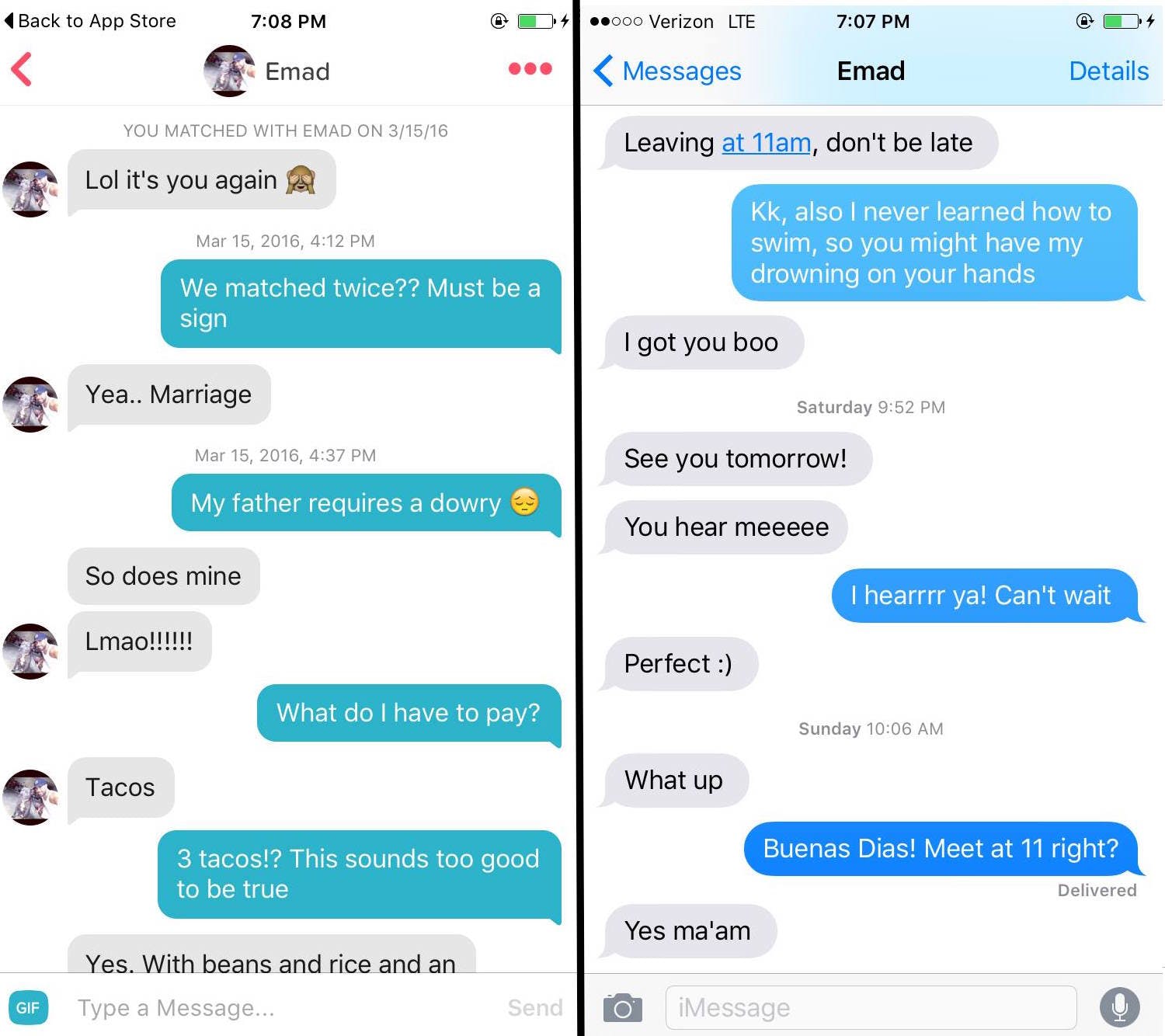 On the left are their original conversations on Tinder, the right their texts leading up to the boat setting sail on Lake Michigan.

Realizing that Emad had bamboozled her with a surprise group date like something out of ABC’s The Bachelor, Kayla went over to a corner to sulk. She said she would’ve tried to swim the 300 feet back to land—but she never learned how. So instead she started posting to Facebook, broadcasting the whole scenario live.

“He came up to me to see what was wrong, and I told him I didn’t think it was cool he manufactured some dating show for himself, to which he replied, ‘I don’t know what the problem is, don’t be uncomfortable,'” Kayla said. “Suffice to say I was super uncomfortable the rest of the time and yelled at passing boats to try and get them to take me to shore. I even offered $100 of the rent money I had in my wallet.”

Kayla continued to document her saga over Facebook Live videos. She was able to film Emad fraternizing with the other ladies on the boat and at one point even sends a plea out in case anyone watching was also on Lake Michigan and could have saved her.

According to Kayla, most of the other girls on the boat were ambivalent about being on this dude’s version of The Bachelor, since they were happy to be on a yacht with booze. But since she doesn’t drink and thought the hangout was supposed to be a date, she was understandably not enjoying herself.

Meanwhile, Emad was busy making out with “a very pretty Brazilian girl.”

And when she was trying to hail down another ship on the water to take her back to land, the other guys on the boat suggested that she just go make out with someone else.

“The other guys on the boat saw this and started encouraging me to just go ‘hook up’ with another guy on the boat to make him jealous,” she said. “Which I think was also part of their plan, have the hottest guy make a Tinder, invite a bunch of girls, and the less attractive friends can have the leftovers.”

On her original status, she posted a screenshot of Emad’s Instagram and a picture of his shoes in the water—she had thrown them overboard. One of Kayla’s Facebook friends commented, regarding the shoes, “This is an SOS message guys.”

To help pass the time, Kayla ate some Doritos with some of the other girls on the boat. Eventually, one of the fellow trapped ladies (who was a friend of a friend, not a Tinder date) called the captain of her ex-boyfriend’s yacht, who also happened to be out on the lake. He came by to pick the girls up.

As she pulled away from the original boat, Kayla yelled, “Sorry about your shoes!”

But as all of this was happening, Kayla’s friends on dry land—who had been tuning in to her Facebook Live broadcasts—started to swarm Emad’s Instagram with comments along the lines of “Where’s Kayla?”

This was originally organic, but then Kayla posted “His IG is Eperrrrota everyone post ‘Where’s Kayla'” as her status. 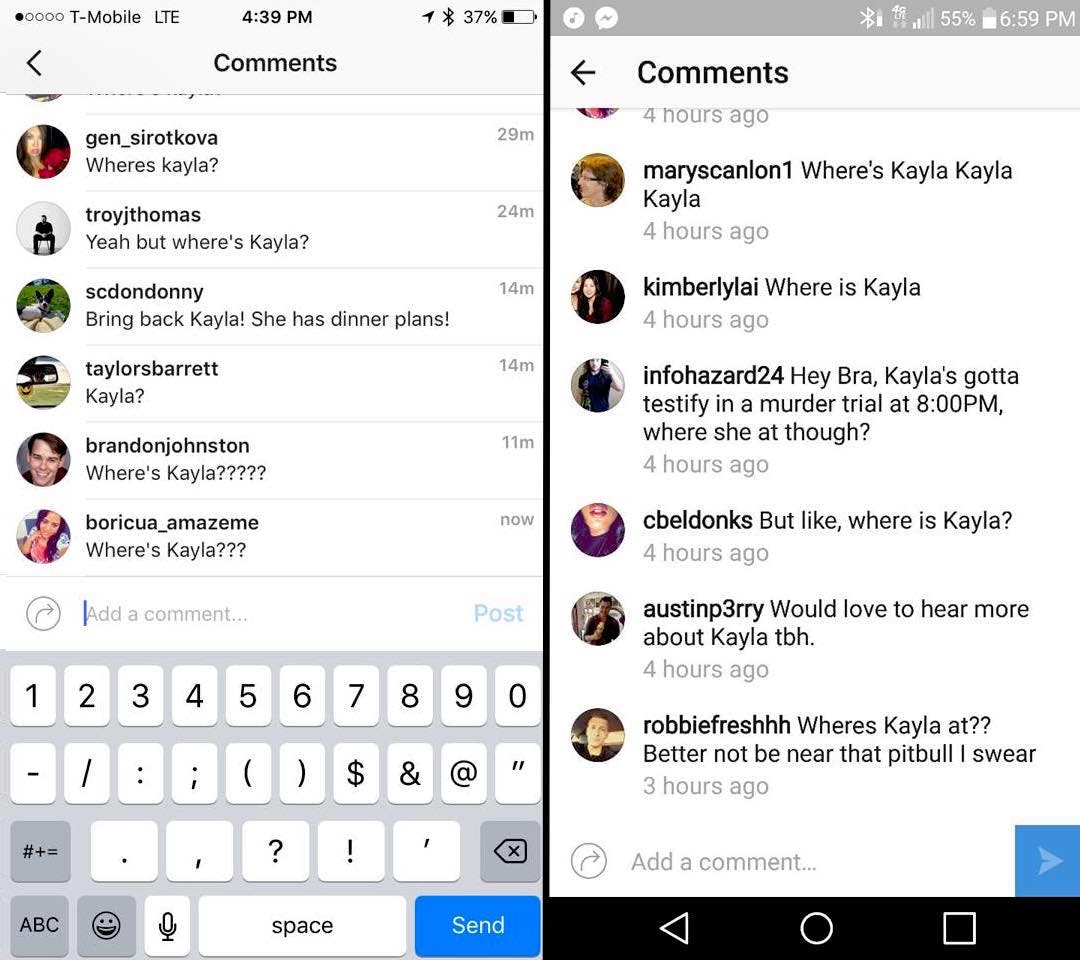 The girl Kayla left with on the rescue boat eventually went back to grab stuff that she had left behind. According to Kayla, she told Emad off in front of everyone. His friends gave her high-fives and said he was in the wrong. Two of his friends also sent Kayla messages on Instagram saying they didn’t like what went down. One even texted her afterward (though they didn’t end up meeting again IRL). 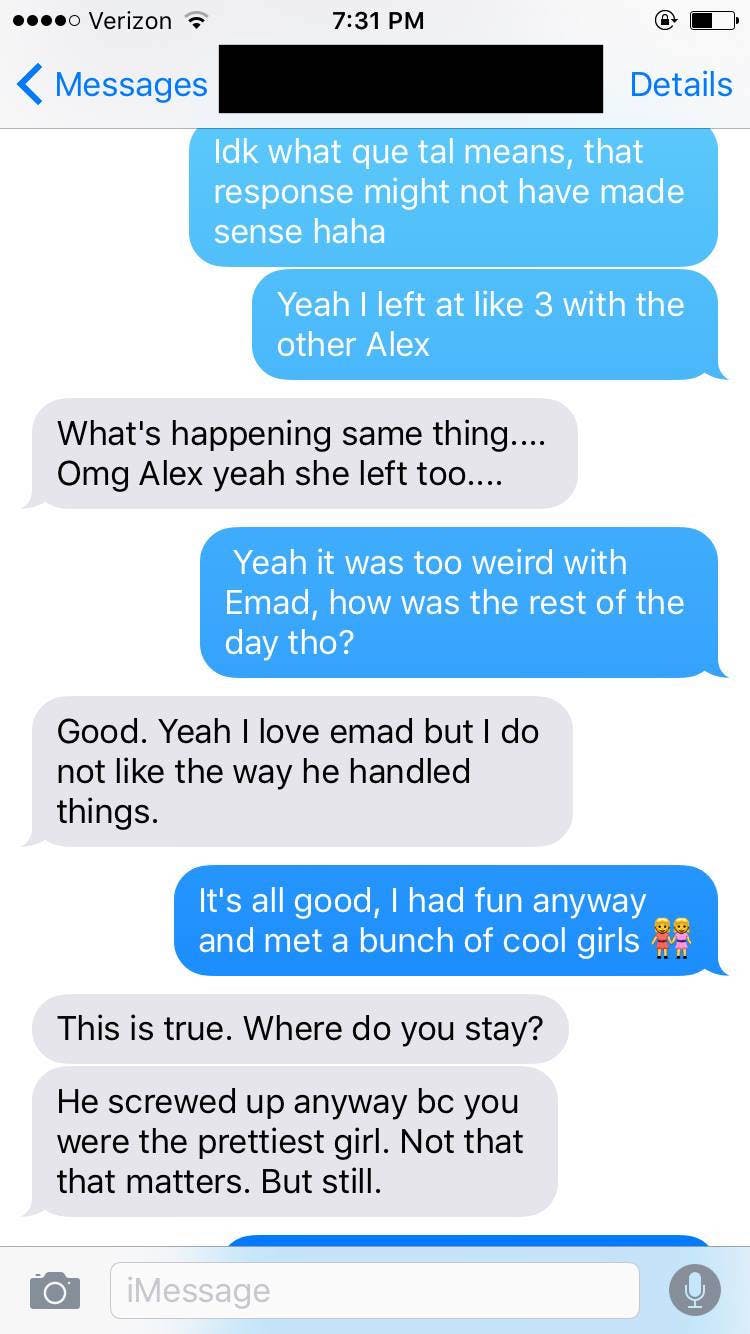 Kayla wasn’t all that upset in the end, but she didn’t appreciate how Emad manipulated a group of women and essentially trapped them on a boat.

Emad has deleted most of the spam comments on his Instagram posts, but one of his friends did ask what was up with everyone asking “Where’s Kayla?” He responded, calling Kayla a psycho. 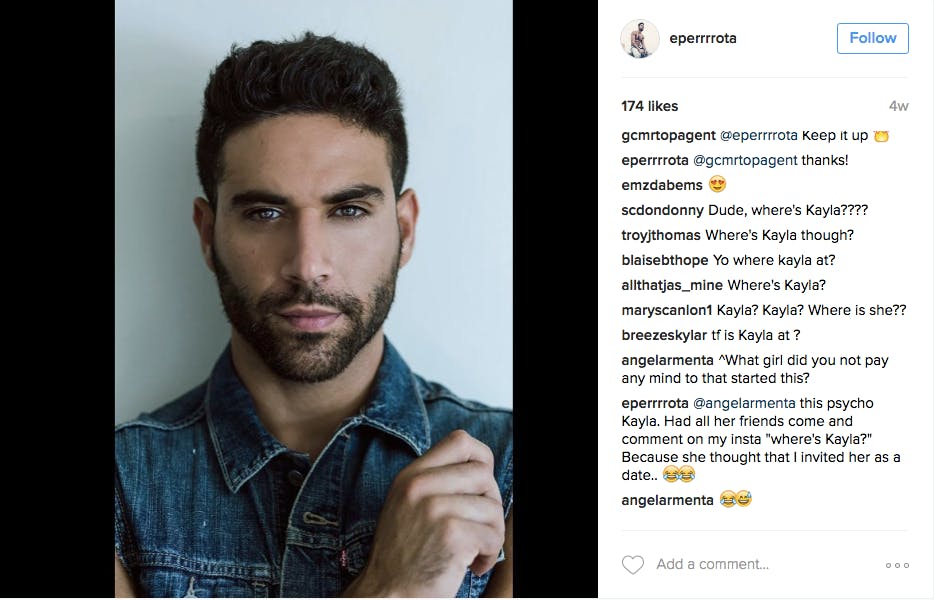 “I think he called me ‘psycho’ because he expects women to just be quiet and polite in these type of situations. He was visibly uncomfortable when I asked why he would invite a bunch of girls and give up all the impression we were going to be his date,” she said. “Only someone who was entirely not self-aware would think inviting 15 women from Tinder on a boat [wouldn’t make them] uncomfortable. So calling me psycho is easier to say than ‘I made a bad decision.'”

Thankfully, Kayla made it back to shore. Looking back on the situation, she does admit that there was maybe a sign or two that Emad was the kind of guy who would pull this bullshit.

“He posted shirtless gym selfies on Tinder, that should’ve been enough of a red flag right there.”