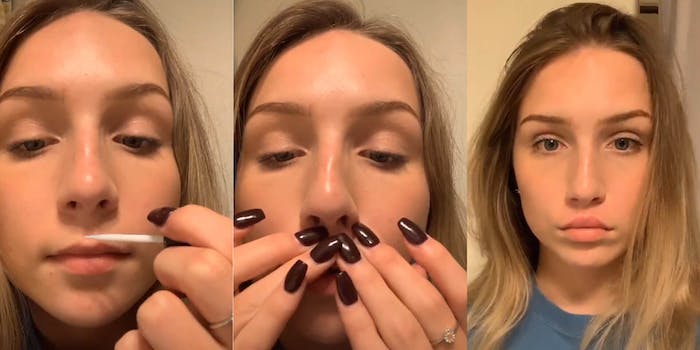 People are gluing their upper lips on TikTok

A beauty 'hack' only TikTok could produce.

Makeup tutorials are flourishing on TikTok, but one recent beauty hack transcends the boundaries of logic and reason.

According to Dazed, a curious trend on TikTok involves gluing your upper lip in a way that makes it look fuller. User @chloehammock4 can be seen here applying adhesive to her upper lip and then pulling it up to give the illusion of a cupid’s bow. The video has more than 400,000 likes.

The comments point out that she’s using lash glue, not something more industrial or harmful. “Hair spray works too,” goes another comment. The video was reposted to Twitter and got more than 31,000 retweets (and some choice comments).

But @chloehammock4 and others pointed to another user, @gnarlysinner, as the origin of this lip hack. Her video has more than 81,000 likes, and the comments seem to veer between “What have u done” and “brb buying glue.”

Other people tried it out, and the goal here seems to be comedy more than functional beauty hack.

Everyone on TikTok was using eyelash glue on their upper lip and I finally caved and I LOOK LIKE A FUCKING PSYCHOPATH HAHAHAH pic.twitter.com/ssGcYKdwWC

Who could forget the controversial Kylie Jenner lip challenge of 2015 which saw teens sucking on bottle caps or glasses to get fuller lips—though the results of that “challenge” were more unsettling. And, as with the Jenner debacle, some people engaging with this trend are being called out for appropriation.

This trend seems a little safer, as long you’re not using, you know, superglue. But it’s TikTok, so people probably are. (But don’t!)