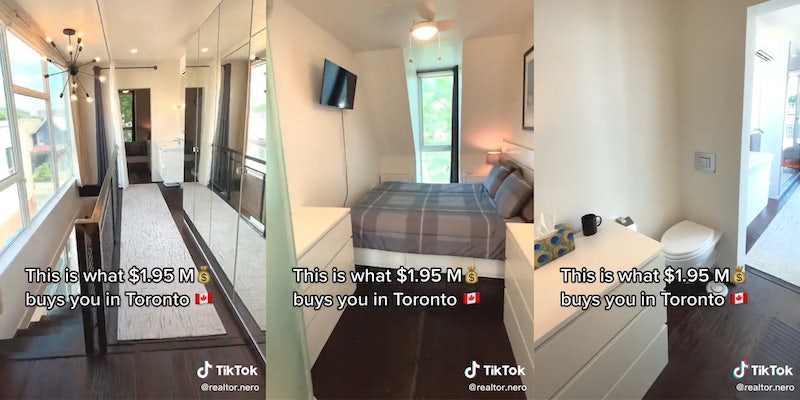 ‘Dawg the toilet is just bare in the bedroom.’: $2-million Toronto property goes viral for its bizarre design

This super-narrow house includes a toilet and shower right next to the bed.

Would you spend $1.95 million on a house where you literally have to poop in your own bedroom? According to this divisive real estate TikTok, that’s a genuine option for wealthy property-buyers in Toronto.

Posted by real estate TikToker @realtor.nero, this apartment is going viral thanks to its unusual design. The walk-through video travels up three very narrow levels with chic, minimalist decor, culminating in a bedroom where the toilet and shower are right next to the bed.

In the words of one response, the toilet’s appearance arrives like a jump scare. The building’s narrow design is already off-putting to many, but in other regards, this seems like a typical example of aspirational TikTok content. Then the toilet appears, and you begin to question everything, noticing more and more issues with this supposedly-luxurious property.

As one commenter points out, the “kitchen” doesn’t even include an oven and is only outfitted with a microwave and very small sink.

Looking back over this TikTok, there doesn’t seem to be another bathroom in the house. The first floor involves an open-plan kitchen, dining, and lounge area, while the upstairs level has another lounge, a balcony, and a bedroom. So unless there’s another bathroom hiding somewhere off-camera when the realtor first enters the building… everyone who visits this house has to use the toilet inside the bedroom.

This property tour attracted a lot of pushback on TikTok, racking up 2.1 million views and a flood of comments like, “Bro thinks someone would pay 2mil for a staircase,” and “2 million to buy a container with a jail cell.”

Meanwhile, Twitter users seem particularly fixated on the toilet angle, with commenters dragging the building’s design. “Having boo boo air in the same place you lay your head is a very bold selling strategy,” remarked one, while another wrote, “Dawg the toilet is just bare in the bedroom. $2 million and you gotta step on your queen size bed to crack a window. I know it’s some tech bro living there.”

Rather than seeming chic and aspirational, this TikTok clearly wound up backfiring. After all, who wants to sleep in the same place where they poop?

The Daily Dot has reached out to @realtor.nero for comment via email.