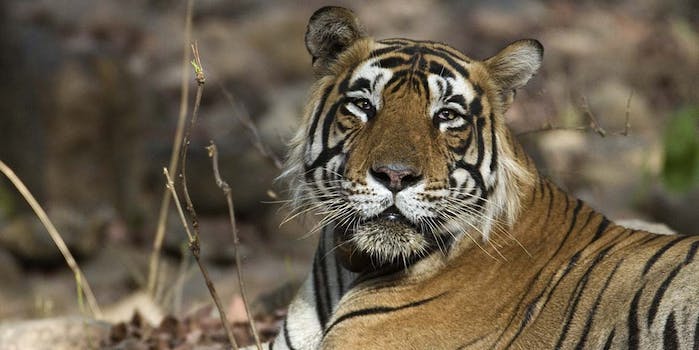 Who's the fairest striped-one of all?

Imagine being in a wildlife sanctuary, where the tigers reside. You’re pulling up and all of sudden the Jeep comes to an abrupt stop—there’s a tiger ahead of you. Now what?

Well, this group seems to have the right idea as they encounter a tiger and its cubs during their safari. Remaining still and as quiet as possible, the group watches as a tiger begins to bite down on one of the Jeep’s side mirrors, before continuing on its way. Just when they think they’re good to go another tiger appears behind them, but is only trying to catch up with the others.

Needless to say, the group is relieved once the tigers are a certain distance away from the Jeep, as they pull out their cameras and take pictures.

The video, taken by the Umred Karhandla Wildlife Sanctuary, is one of four other videos available on the organization’s YouTube account. The other three feature a tiger named Jai (or Jay), who’s considered the most handsome tiger in India. We’re cool viewing India’s most handsome tiger from the comfort of our computer screens.