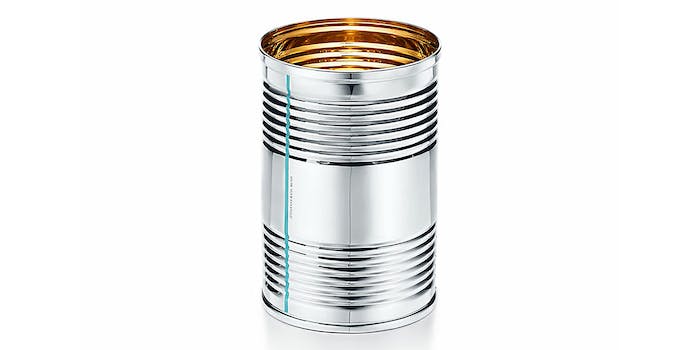 If you have money to waste, this line is for you!

No one shops at Tiffany & Co. expecting to find a reasonably-priced gift. The company is known for its high-end diamond engagement rings, necklaces, cuff links, and other items. It’s website even has a “Price is no object” section. But a new line turns basic items that are usually cheap into ridiculous symbols of wealth. Tiffany’s is calling the line ‘Everyday Objects.’

When panhandling before the big riot, don't be caught without this stunning $1,000 tin can from Tiffany's pic.twitter.com/Mgw5IEup2H

The company’s chief artistic officer told Bloomberg in a statement that the ‘Everyday Objects’ line “incorporates the best quality, craftsmanship and design with a level of functionality that allows you to use these things every day.”

On Twitter, people reacted to Tiffany’s new line with laughter and disgust.

Is this a joke website? Is someone punking Tiffany’s ?? pic.twitter.com/YrTxkNG263

nothing says "late capitalism" quite like tiffany's charging $1500 for literal trash pic.twitter.com/PZmEQRvAf7

gross tiffany's is selling this children's orb for $1000 pic.twitter.com/Dyy8SX3oDy

There are even fake paper cups for $95.

It’s hard to justify the cost of these items, especially the tin can, when other people literally can’t afford cans of food during the holidays.

But you know someone will buy these ‘Everyday Objects’ anyway.