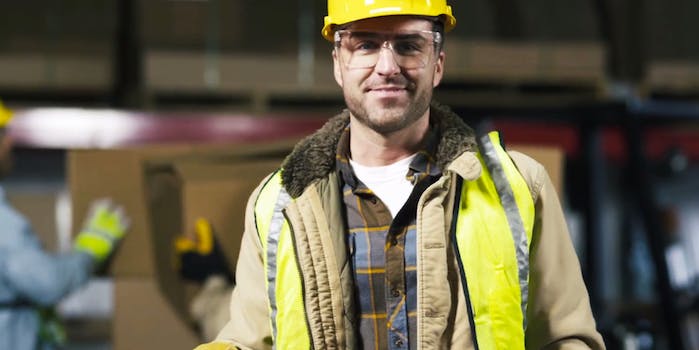 The world’s biggest advertisers come off as fools.

A new Internet parody, “This Is a Generic Brand Video,” shows how generic, vapid content is hidden within aesthetically beautiful commercials. And once again, the world’s biggest advertisers come off as fools.

The clip, created by stock-footage company Dissolve, is based on a poem by Kendra Eash, first published in McSweeney’s. In a twist, the lines have been blurred between cynical advertising and satire: The video becomes an opportunistic anti-commercial based on Eash’s poem. It exemplifies this particular style of advert and parodies it at the same time.

Dissolve hired a folksy dude who sounds like he should be in a Jack Daniel’s commercial to read Eash’s verses over a montage of stock video clips. It achieves what Bill Hicks once deemed the “anti-advertising dollar.” Which is still advertising, by the way.

Eash’s poem is a swipe at the kind of airy, slow-motion nonsense global brands such as Microsoft, Coca-Cola, and Sony have been broadcasting for nearly a decade now. Sony laid down the stylistic template with its 2005 spot for Sony Bravia televisions, featuring thousands of colored balls floating through San Francisco in slow motion to Jose Gonzalez’s dreamy version of the Knife’s “Heartbeats.”

Eash is particularly critical of the hidden messages in stop-motion and time-lag photography, which is now ubiquitous in big-ticket commercials: “Stop-motion footage of a city at night with cars turning quickly makes you think about doing things efficiently and time passing.”

This ad from Microsoft has many of the hallmarks. Eash sums up Microsoft’s creative reasoning: “We think first of vague words that are synonyms for progress and pair them with footage of a high-speed train.”

Like so many ads for global brands, the Windows clip is populated exclusively by good-looking, ethnically diverse people. Eash explains: “Lest you think we’re a faceless entity, look at all these attractive people.”

And: “Using a specific ratio of Asian people to black people to women to white men, we want to make sure we represent your needs and interests or at least a version of your skin color in our ads.”

Despite launching the seminal bouncy-balls ad nearly a decade ago—when digital technology first made capturing this aesthetic possible—Sony still employs the same tricks to create absurdly high-budget videos. Its 2013 commercial for the Xperia smartphone range was comprised entirely of slowed-down HD footage of people being covered in paint, and after a minute of specially commissioned crooning from David Bowie (“Sound and Vision,” of course), the consumer is instructed not just to buy the product, but “be moved.”

After “This Is a Generic Brand Video,” a more apt instruction is, perhaps, “be suspicious.”