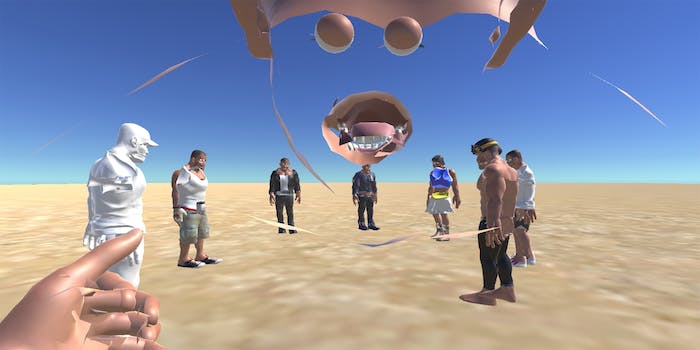 Screengrab via The Rock and The Rock / kevinroark.itch.io

There’s a murmur of voices and music as you gaze upon the desert floor. It sounds like the display room of an electronics store or a warm and welcoming dinner party. It does not sound like a series of massive televisions dumped onto a pile of sand, all featuring footage of Dwayne “The Rock” Johnson in various roles. Yet that’s exactly what it is, and here you are as the Rock, on a quest to fall in love… with an actual slab of stone.

The Rock and the Rock bills itself as a combination mini-game and interactive film. It’s nearly five minutes of the Rock running through an area populated by only his own likeness as well as massive boulders— panting, out of breath—until he reaches the bottom of a cliff. He ascends and finds his tribe. It’s pretty much the exact opposite of what futurists were predicting when the phrase “dating simulators” entered the lexicon.

It’s only $1 though, so anyone with a little spare change and a whole lot of curiosity can lose themselves to this. 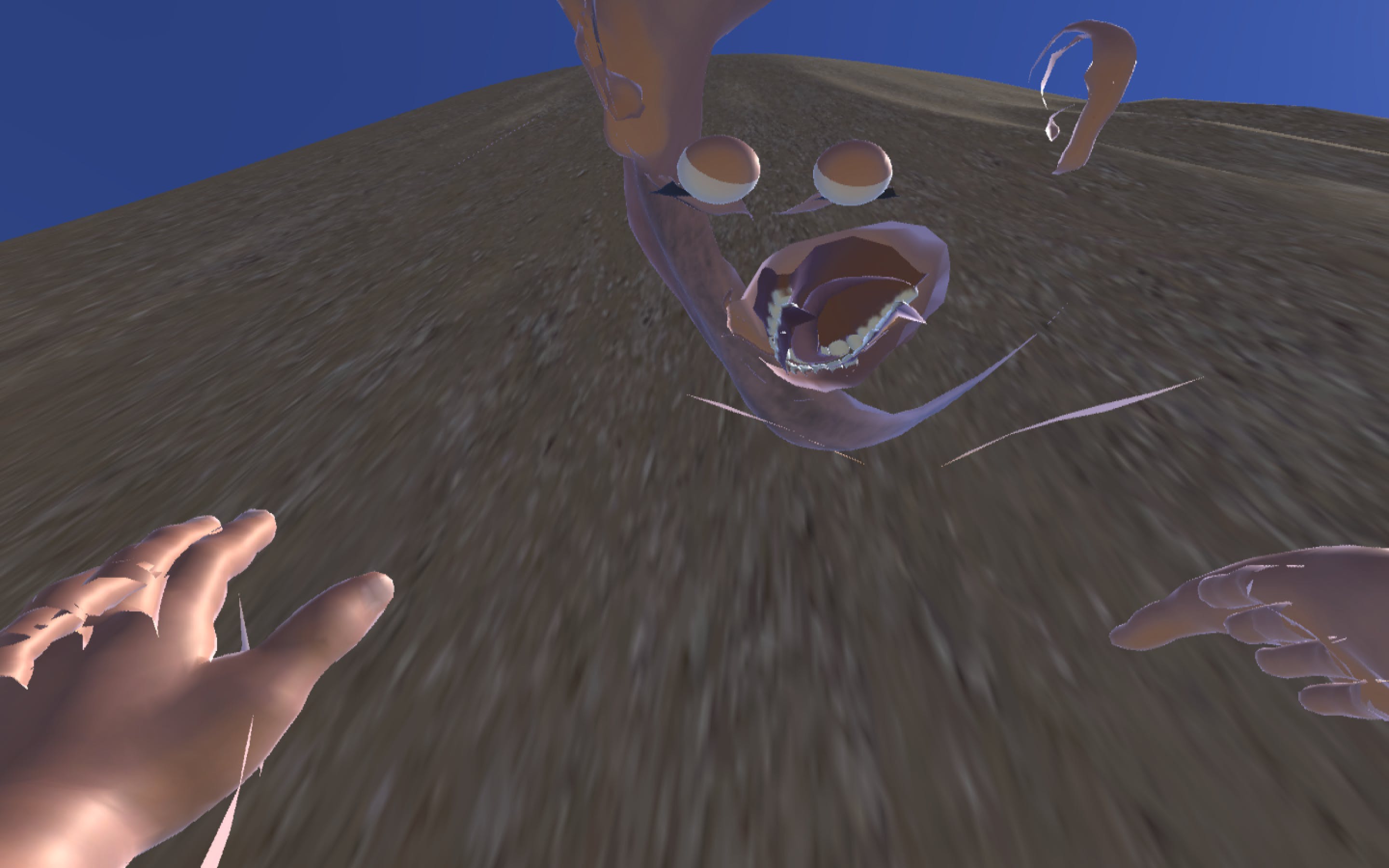 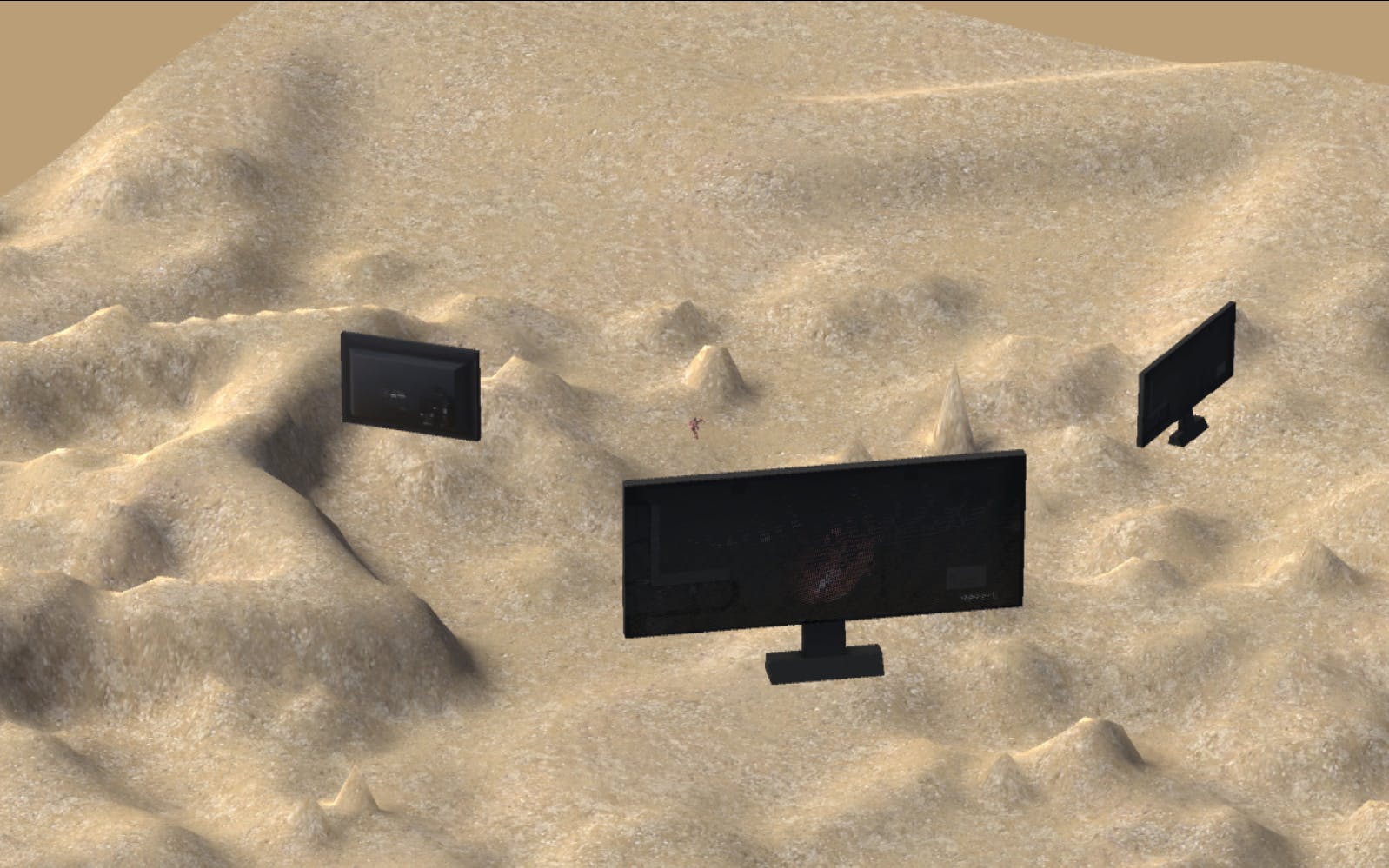 Players start off with this jarring view from the inside of the Rock, which they can toggle out of by pressing any key. The bird’s eye view is probably the most docile aspect of this barrage of sensory input. It’s meant to overtake you, to evoke what creator Kevin Roark describes as “the feeling.”

“I think what unifies most of [my] work is an attempt to evoke/deal with this one particular feeling that I feel all the time,” Roark told the Daily Dot. “Things that make me feel the feeling include: dogs on leashes, money on the ground, narrated YouTube videos, tech recruiting emails, celebrity net worth.”

That latter point is certainly fitting now that the Rock has been named Hollywood’s highest paid actor. Roark says The Rock and the Rock came to him in a manic vision that had less to do with the color barrier-breaking earning potential of a former wrestler and more to do with how one evolves as a person, though. He chose the desert landscape because of its cultish implications—itself a potential commentary on celebrity.

This goes hand-in-hand with Roark’s idea of contemporary dating. Simulators such as his do little to shed light on legitimate partnerships. They’re tools meant to lampoon stereotypes, sending the zeitgeist haplessly bumbling through the same shitty dating protocols we all face IRL. With standard dating simulators, dialogue as heavy as a can of spray paint stomped by a combat boot illustrates the type of person you should/shouldn’t date.

Roark takes a more abstract, painterly approach. Those Rocks that the Rock meets at the game’s end all point to narcissism. At its climax, the game’s musical reprise is composed entirely of the Rock’s vocal sounds.

“I had been thinking about Dwayne J. a lot and his transformation from wrestler to mainstream idol, and also going outside to see and stand on big rocks,” Roark explained, adding that “I like the Rock best when he is singing. The Rock softens.”

The 23-year-old likens The Rock and the Rock to the scene in BoJack Horseman‘s inaugural episode where BoJack jacks it to himself. He equates sexting to a similarly self-pleasing activity. This isn’t your typical stream-of-consciousness artist’s statement, and Roark isn’t your typical video game programmer.

He began learning the art of programming at 17. In between typical teenage summer jobs of spinning signs and working at fast food joints, Roark went to work at NASA’s Stennis Space Center near his hometown of Slidell, Louisiana, researching atmospheric modeling techniques.

“I learned to program at Stennis and it has sort of followed me around since then. Lately I’ve been sort of freaked out about it and tend to believe that extended sessions of work or play (same thing?) at the computer put your brain in a primal super-stress production mode, but I do not think I will stop programming,” Roark says. “I learned that I could make art when I was 20.”

His full-time job as an iOS developer with VSCO has drastically shifted for that reason, as Roark cites a more unconventional schedule as being more conducive to his overall well-being. Understandable, given he’s got his hands in a little bit of everything, from working with cloud computing startup Zeit to running his own digital media clearinghouse with friends under HDS LLC.

Roark divides his time into three segments: MoneyWork, ArtWork, and FunWork. The Rock and the Rock may mark the first time that all three have been combined. Then again, I have no idea what he plans to do with the $20,000’s worth of shredded one dollar bills he mentioned purchasing when I ask what other professional projects he has planned.

Lately, Roark’s been blending the online and offline worlds. According to his website, he has 72 works total. They range from FACE TIME, a project exploring his fascination with deformation as it evokes “the feeling” to (985) 718-8538, which turns a series of pre-programmed phrases into phone tones.

Roark’s forthcoming projects include a multimedia collaborative effort with Carmichael Payamps and composer David Bird. Its subject? The same type of digital simulation that makes The Rock and the Rock so compelling. Roark also has another game in the works with Claire Donato, though he’s not sure when it’ll be released.

Needless to say, his manic creativity shows no signs of stopping. Neither does The Rock and the Rock. Once you reach the top of the mountain, sprout wrings, and take flight with your fellow Rocks, the game stays stuck in a feedback loop of Rock vocals, its characters going higher and higher. The pause menu no longer functions. It’s just you, the Rock, and the horizon.

Update, 3:00pm CT, Aug. 25: This article has been updated to include the fact that Roark recently bought $20,000’s worth of shredded one dollar bills for the low, low price of $90, which you can do too via the U.S. Treasury’s moneyfactorystore.gov.